So there I was, minding my own business, actually driving the speed limit in moderate traffic on Penn Shop Road, a two-lane secondary road. The cross streets all have stop signs, Penn Shop does not. I’m taking my daughter to cross-country practice. It’s about 6 PM. I’m approaching an intersection at about 40 MPH, see a black Saab at the stop sign. The driver looks right, looks left, and just pulls out into the steady stream of traffic. Into me. Whamo. He T-bones the Porsche, hitting between the center of the passenger door and the center of the rear wheel. We do a nice 180 across the line between two on-coming cars and come to rest facing a very surprised tow-truck driver who was previously behind me. Because of the way he spun us around I had first thought he only caught our rear bumper, but sadly that was not the case. 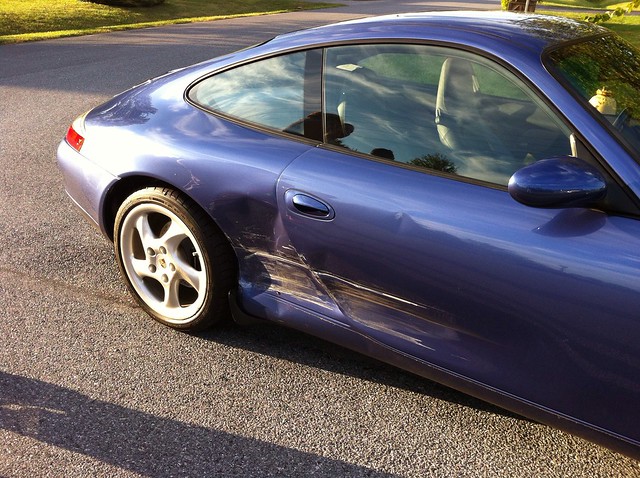 Nobody was hurt in the accident, though my daughter has a sore back and ribs from hitting the center console. The impact didn’t set off the side airbags and the car was still drivable, though the right rear wheel is a bit toe-in. The cosmetics are easy enough to fix, the damage to the suspension and possibly the transmission is my biggest worry. I’m not looking forward to having to deal with the other insurance company to get compensated for the “diminished value” of the car either. It could have been worse: Because we spun in the intersection we didn’t end up in the ditch that’s on either side of the road. I should get the repair estimate Monday. 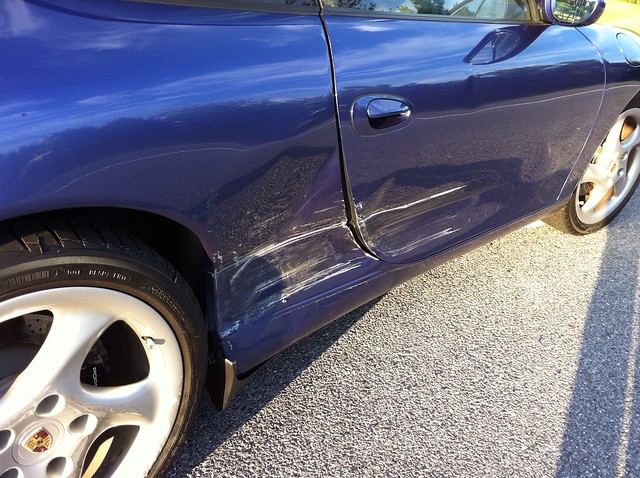 If you find yourself deciding that what you really need in life is to buy yourself a Porsche 911 (and if you’re reading this, it will probably happen to you someday) you have to decide at what point do you want to jump in since production began in 1964. Are you looking for a daily driver, a collector car, or a track-rat? Air-cooled or water-cooled? Creature comforts or Teutonic Utilitarianism? For a car that appears to be unchanged since its introduction in 1963, there certainly are many eras to choose from. Start by learning as much as you can.

In the past five years, GeorgeCo has sold two BMW E30s and a MINI Cooper S. We spent most of the summer of 2012 trolling the interwebs looking for something new, something sleek, something… Porsche. Finally in August the opportunity presented itself to purchase the car pictured below.

Two good places to start are the Porsche Club of America and the magazine Excellence. The Excellence buyer’s guide is a great resource. The general rule of thumb for purchasing a used 911 has been to buy the newest car you can afford. Porsche is famous for evolutionary, not revolutionary change. That holds true until the end of the air-cooled era with the 993 in Model Year (MY) 1998. Air-cooled 911s are selling at a premium (bubble) with a 1998 993 likely selling for twice as much as a water-cooled 1999 996.

Porsche introduced an entirely new 911 with the type 996 in 1999 (in the U.S.) Designed from the ground-up, the modern manufacturing techniques that went into the 996 certainly saved Porsche from financial ruin, but they have also has created a divide in the market between the old-school purists who prefer the older air-cooled cars to the new-school softies who prefer the creature comfort (working AC) and ride quality of the water-cooled cars. 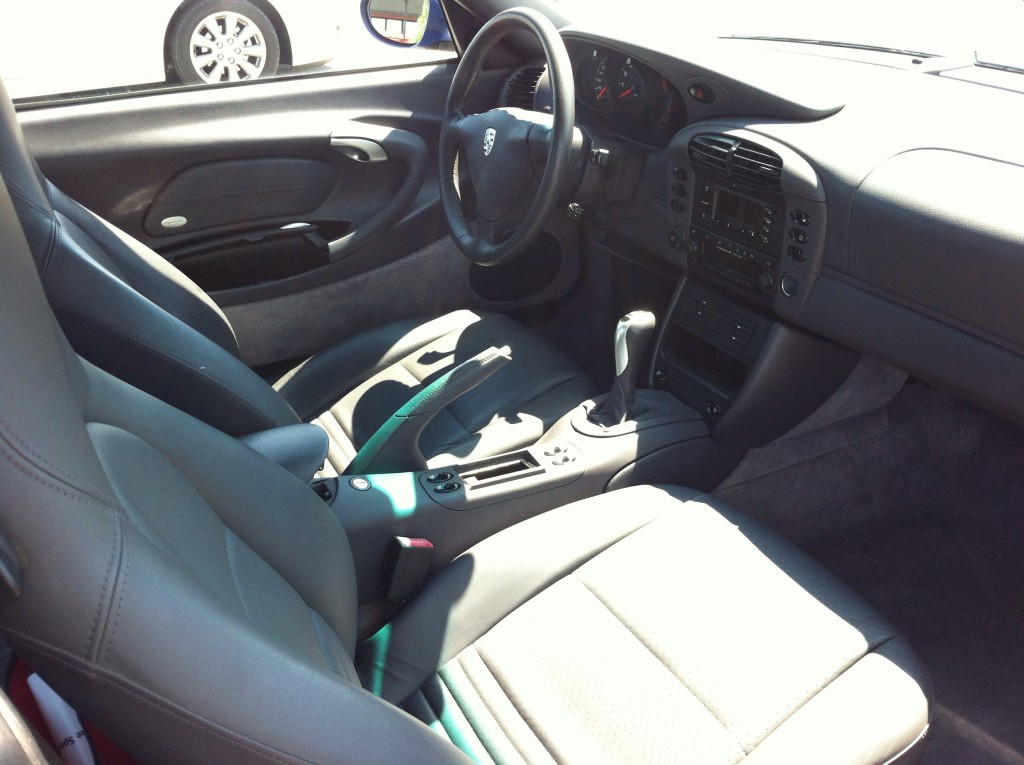 Early engine failures and bad communications management on the part of Porsche corporate, has created a low point in the market the savvy buyer can exploit if careful. As the last of the air-cooled cars, the 993 is seen as having greater collector potential — representing the peak of evolution. If you’re like me, you don’t carry any air-cooled baggage. You just want a car that has excellent handling, plenty of power, and is a hoot to drive. Besides, everyone should own a rear-engined car once in their lifetime. Life is too short to drive a boring car. 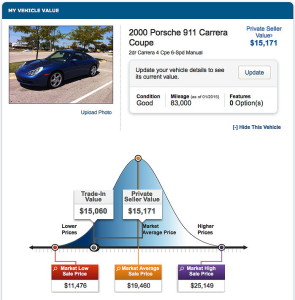 Update Nov, 2018: I was curious to see how this model is holding up in value. I pulled the latest data from the Hagerty valuation tool, and it’s actually doing better than I thought it would when I originally wrote this post.  It hasn’t benefited from the Porsche bubble, but it hasn’t tanked either.  In fact it’s actually trending up ever so slightly as seen in the chart below: 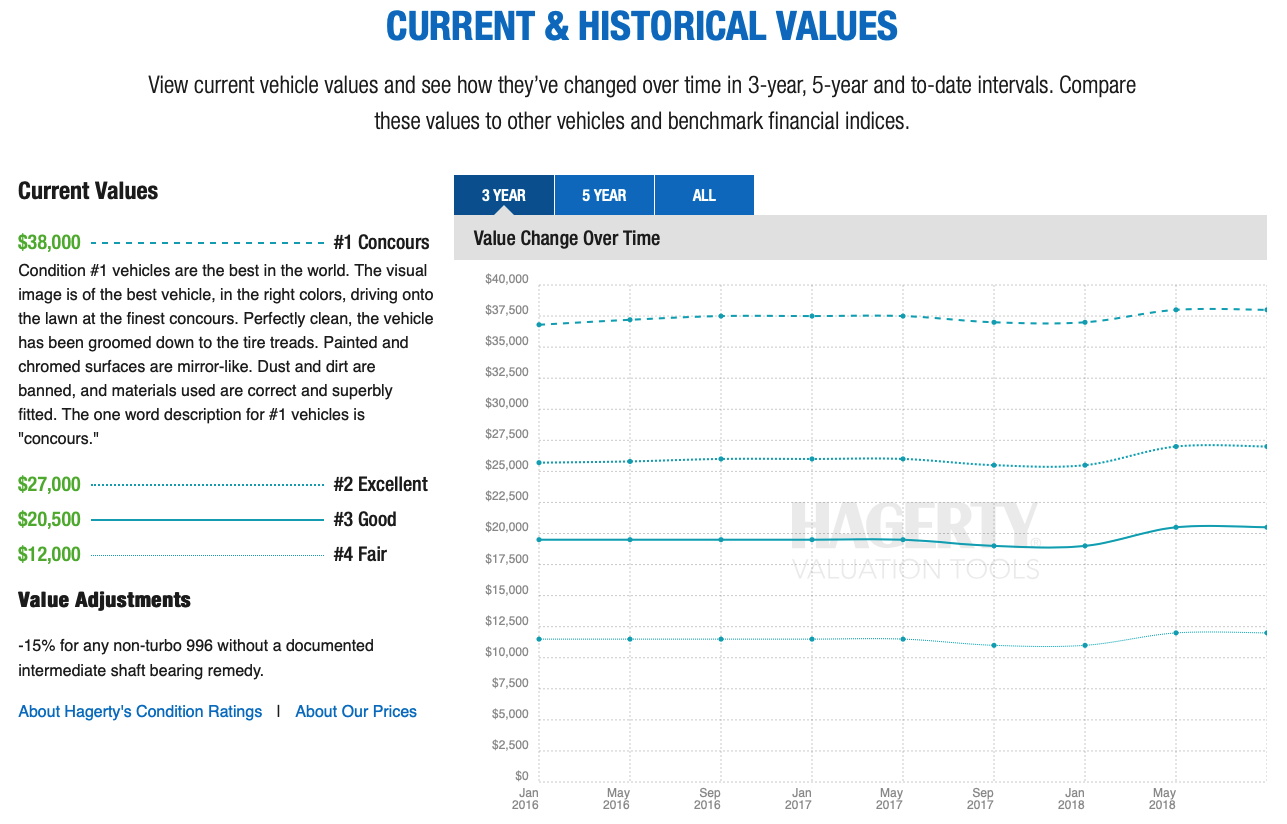 So what has the market spooked with these cars? Catastrophic engine failure. Oh, there’s that…. The M96 flat six engine is famous (infamous?) for two weaknesses: a leaky rear main seal (RMS) which is not a big deal; and a failure of the Intermediate Shaft (IMS) Bearing. With IMS Bearing failure you will likely lose the engine. Rebuilt, used engines cost upwards of $16,000. All is not lost for the intrepid used-car buyer, however. Most used 996s have had the RMS replaced by now. If there isn’t a service record available, just look for evidence of oil leakage in the middle of the rear sway-bar under the transmission housing as indicated by the arrow in the photo below. 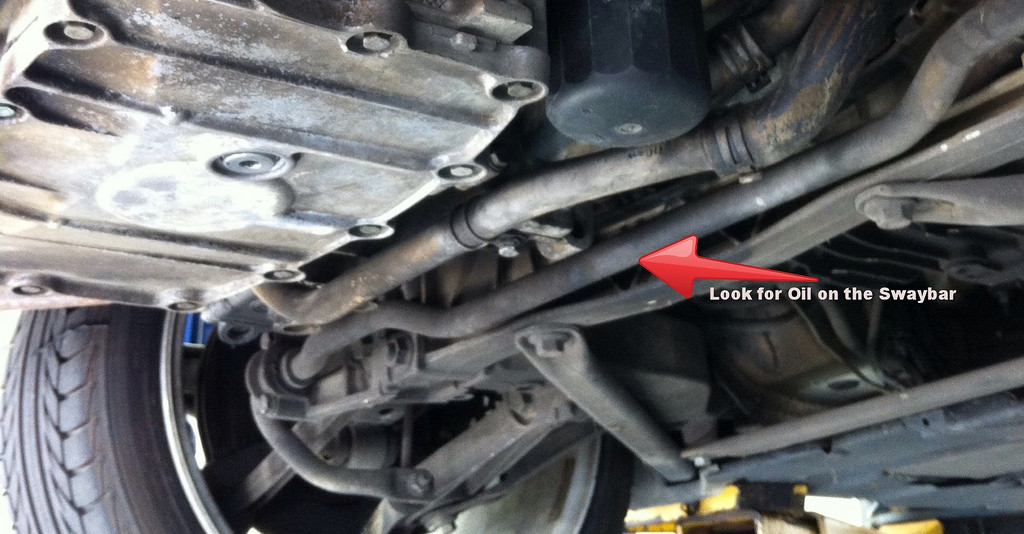 Don’t let the leak stop you from buying the car, just include it in your price negotiations and budget in the cost of clutch job and RMS replacement. Replacing the RMS is a minimal additional cost if done at the same time as the clutch. Better yet, while you have the transmission out, replace the IMS Bearing as well for an additional $800 and you won’t have to worry about IMS failure either.

[Update 2018: Check out this link to see what my IMS bearing looked like when it was changed at 104k miles.]

Short of replacing the IMS Bearing there are other options:

Although I hope I got a car without issues, I installed the IMS Guradian until I can have the IMS Bearing replaced the next time I get a new clutch. Before you loose your enthusiasm from the 996, remember that earlier 911s aren’t without similar levels of risk: 2.7 liter air-cooled engines had valve-guide issues and were prone to having cylinder head-studs that pulled out. You just need to do some research so you know what you’re getting into. Remember: “My car performed flawlessly, and I never worried about the engine once” wrote no one on a Porsche internet forum. Ever.

Once you find the car you’re looking for at about the right price, you should try to arrange a pre-purchase inspection (PPI) if possible. If you can’t arrange that, then conduct the inspection yourself using a checklist to try to retain some level of objectivity. Better yet, use a checklist and bring along a knowledgeable friend to actually score it for you. Here’s a handy guide from ammonyc.com.

I found the GeorgeCo Porsche at Plaza Motors in St. Louis, MO. I bought a one-way ticket on Delta from Baltimore and flew out, checklist in hand. I have a pretty good record at picking cars (not counting the occasional Mercedes or Alfa), but I told myself I would only buy this car if it scored Very Good or better. Fortunately for me, it scored a 135 and I was in business. If it hadn’t scored above 131 and they were not willing to further negotiate price, then a one-way ticket home was only an additional $120. Fortunately for me, the car was as advertised and after an 850 mile roadtrip, it was at home in my driveway.

I approach the maintenance history like a good war-story: If you weren’t actually there when it happened, then assume it didn’t. If you’re lucky, you will get a full service history with your car. This car was originally purchased and serviced for most of its life until now at the same dealership. I received a detailed record of the 60,000 miles service and clutch replacement, but everything before that is just a one-line entry on the service history report. Better than nothing, but not ideal, so I decided to replace all other wear items and fluids that I can but not attack the IMS until there’s sign of clutch wear (or a RMS leak). This ultimately included the rotors, pads, and brake fluid; oil and filter; coolant; spark plugs, coilpacks, light bulbs, wiper blades, and anything else that routinely gets replaced as a wear item.

When I changed the oil, I sent a sample out for analysis. The report I got back made me doubt the alleged oil-change that was performed shortly before I picked up the car. Fortunately the report indicates only that the oil is worn out, not that there’s any abnormalities in the engine. Observation of the filter didn’t show any metallic objects either.