I think I finally solved a nagging problem I’ve been having with my right rear brake caliper. The right rear brake always ran hotter than the left. In normal city driving, it wasn’t a big problem, but at the track, that meant I would cook the brake pads at the end of a long session. It was all the more confusing because I was at Summit Point main and that’s the unloaded side. I replaced the brake caliper thinking the piston wasn’t retracting and that didn’t help. I disconnected the emergency brake cable thinking it was somehow binding under suspension compression and that wasn’t it either. Pressure was good and the brake line was unobstructed. It was perplexing.

While changing brake pads last weekend, I noticed the brass bushings had seized. Not only that, but they had seized in two different positions, as if under a very strong twisting force. Then I realized, the one thing I hadn’t ever checked was the brake carrier. At first I thought maybe one of the posts was cross-threaded, but sure enough the carrier itself was bent. 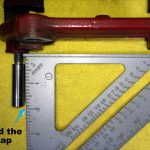 It’s bent. Dang. The direction of deflection made it difficult for the caliper to move once brake force was released. This would cause the inside to remain in contact with the rotor causing increased heat and wear. I installed a new carrier and no more heating problem. The piston retracts, and the inside pad moves away from the rotor again.

So the question now is why did it bend? It was binding because the brass bushings allowed no room for play, but did the bushings somehow cause the bending or was it just a manufacturing defect? For now I’m running OEM rubber bushings, but will keep an eye out for future temperature spikes when I head back to the track this coming weekend.