Unless you toot your own horn often, you may not find out it doesn’t work until you need it. Luckily for you, the trouble-shooting process is fairly straight forward, even if the eventual repair might not be. The three most likely causes of horn failure are: 1. Blown fuse; 2. Water-logged horn trumpet; and 3. Bad horn clock-spring. Let’s figure out what’s wrong first. 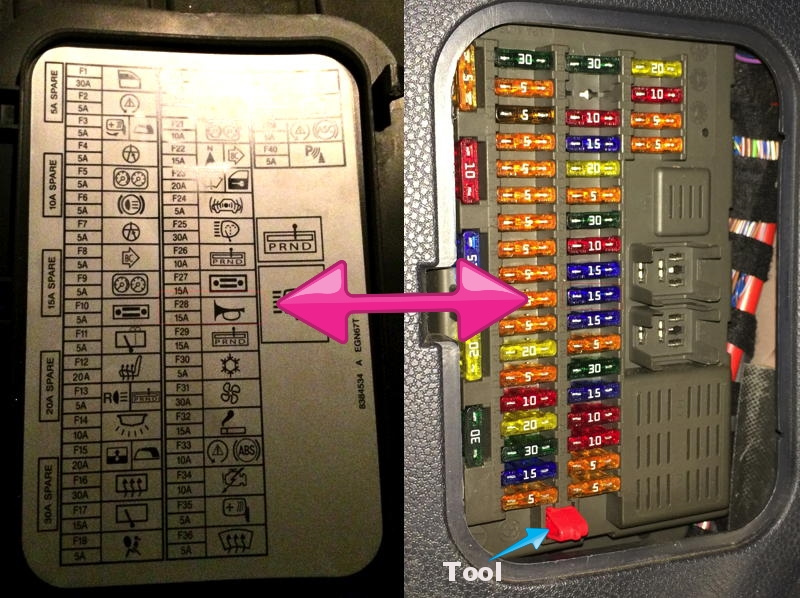 Assuming your car runs and has electrical power, start by checking the fuse-panel inside of the vehicle. For first generation MINIs, it’s located on the left side of the driver’s foot-well. On the back-side of the panel cover should be a chart listing fuse number and function starting from the upper left and counting down each row left to right. For my car it was fuse F28, a 15 amp fuse. Use the fuse removal tool located at the bottom of the panel and gently remove the fuse. Hold it up to a flashlight and check that the filament is still intact. If you get lucky, all you need to do is replace it with a new fuse and you’re back in business. There should be a spare fuse stowed on the left side of the panel. If not, grab the fuse from a non-essential system (like the cigarette lighter, F32) and plug it into the horn fuse slot to check that it is in fact the fuse that’s causing your problems. If the horn works, go to your local auto-parts store and buy some spare fuses and remember to replace the one you moved. If it isn’t the fuse, then go to the next step.

Normally the next step would be to remove the horn relay, but given that those rarely fail on the MINI and that it’s located on the back side of this fuse panel (and a pain to get to) we’re going to skip the relay and go to the next two most likely points of failure: the horn trumpets themselves and the steering wheel connector. If you recently removed or replaced the steering wheel, skip ahead, otherwise, start with the horn trumpets. 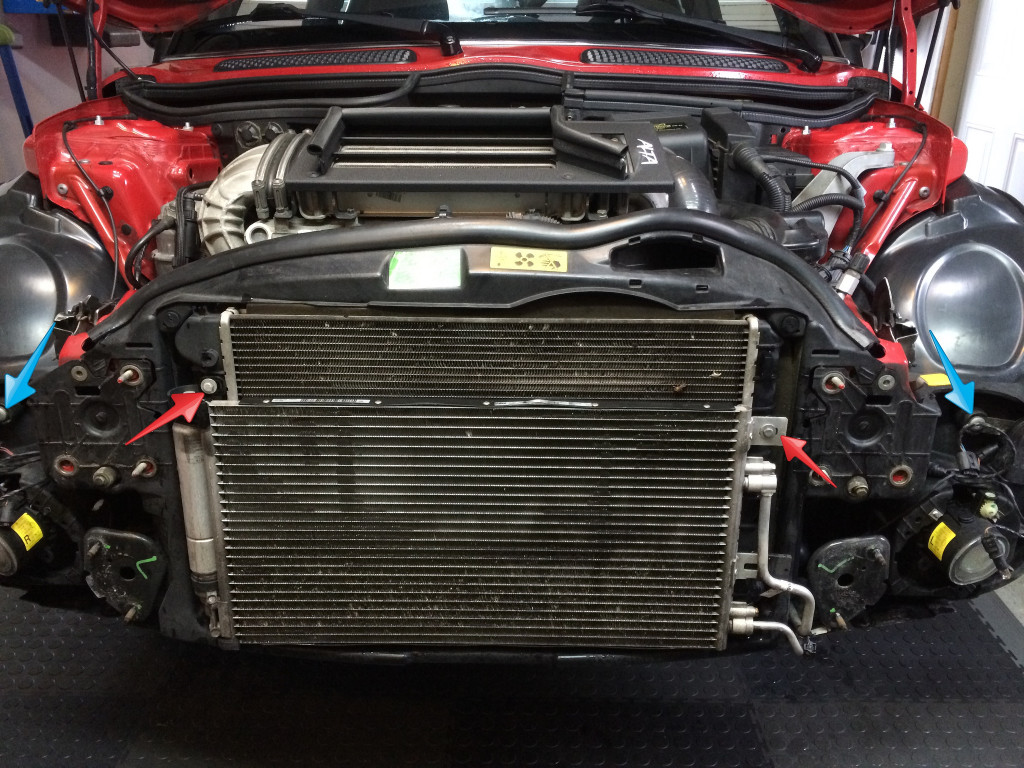 Remove the Torx bolt holding the trumpet to the chassis and unplug the electrical connection (blue arrows above). Inspect the trumpet, turning it over to see if any water comes out. The vehicle horn is an important safety feature, especially in a small car. If you have to replace it (or rather them since there is one on either side), consider upgrading to a louder model. Stock replacement horns are available from your dealer (parts 61337193996/7) and are a direct replacement using the factory electrical connection. Hella Twin Trumpet Horns are a less expensive, slightly louder option, but require splicing the electrical connection. Otherwise they fit in the stock location. Check the trumpet function by providing 12-volt power (briefly) to it directly. Next check the electrical connection by hooking it up to a DC volt meter and pressing the horn button with the ignition on. One (or both) of these tests should fail. If you have power from the horn button, but no sound when directly powering the trumpets, then all you need to do is replace the trumpets. If you are not getting power from the horn button, then the problem is probably in the steering wheel. (We’re going to come back to the red arrows next to the radiator later.)

If you really want to be thorough, now would be the time to remove the fuse panel and check the horn relay. It’s relay K2, at the bottom left of the panel and is probably gray in color. But chances are that it’s OK and the problem is in the horn clock-spring.

Word of Caution here: To get to the horn clock-spring, we’re going to remove the airbag. We have detailed instructions here, but remind you that you are proceeding at your own risk. You must respect the power of the airbag or it will hurt you. Make sure the front wheels are straight, that the steering wheel is level, remove the key and lock the wheel level. Start by disconnecting the car battery and taking a break for 15 minutes. Remove the airbag per the instructions above and remove the steering wheel. It should look like this: 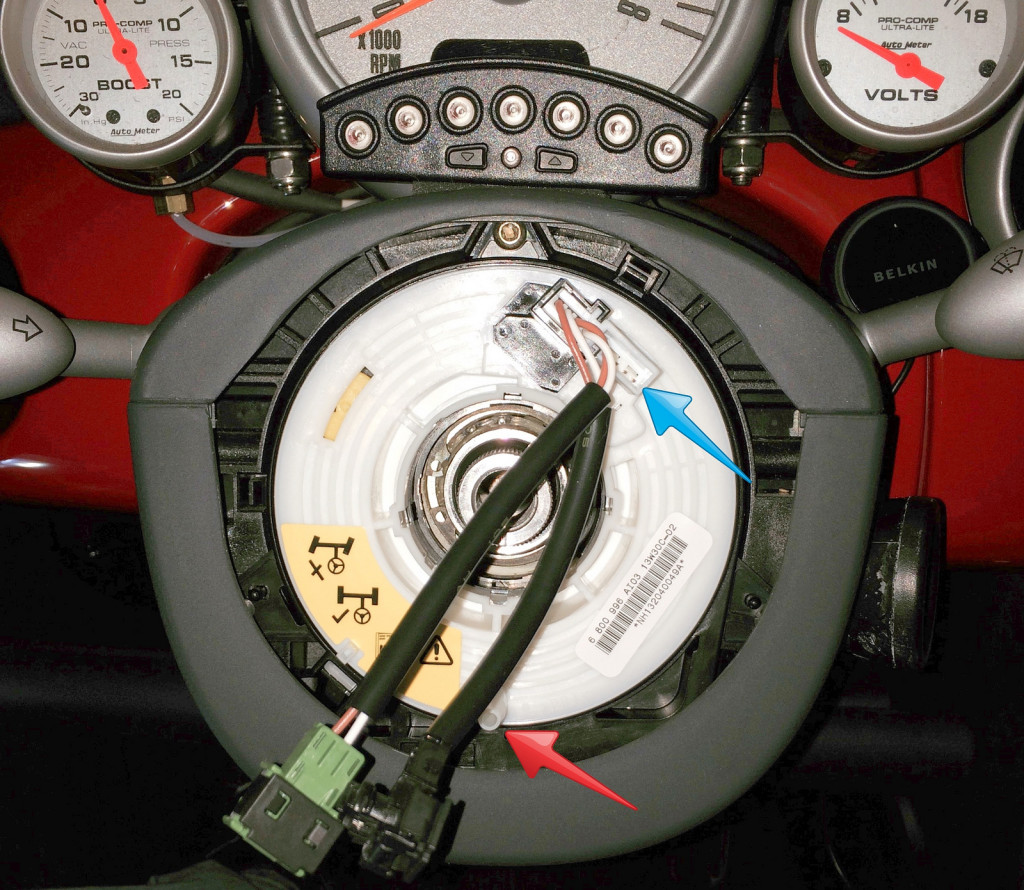 The horn clock-ring (officially the “Slip Ring”) is the white component with the wires attached. The blue arrow shows where the horn wire from the steering wheel attaches and the red arrow shows the locating pin that’s critical to fitting this component properly. The MINI steering wheel moves 5 complete turns, lock-to-lock. Since your wheels are pointed straight ahead and your steering wheel was level when you removed it, this pin needs to be at the bottom and in the middle of the 5 turns. You can check it by turn it left or right 2 1/2 turns to stop (be gentle). The most common source of horn failure is this component. Either it was damaged when the steering wheel was removed/replaced or it gives up with time since it’s plastic.

To replace it, start by removing the lower cover from the steering column. It is held on by two Torx Screws and a snap fitting down by the knee bolster. Remove the snap fitting by working the tips of your fingers in from either side and pull apart. Remove the rubber ring around the ignition and the lower half will fall away. Remove the two small screws holding the upper half to the Switch Unit Housing (number 4 in the drawing below). 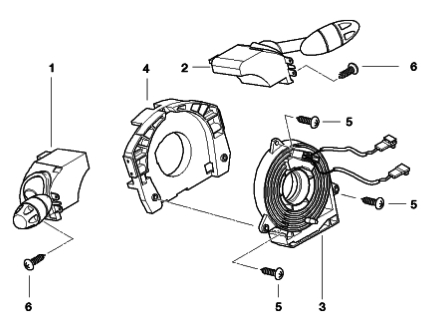 Remove the three Torx screws and pull on the white slip ring. Disconnect the two electrical connections on the back, and remove the slip-ring from the housing. When you order a new clock-ring (slip ring) which is number 3 in the drawing, it comes with a new housing (number 4), but you do not need to replace the housing. Remove the new slip ring from the housing, connect the two electrical connections, replace the 3 torx screws. Replace the two small screws. Check that the slip ring is in the correct position as above (if you are using a new factory part, it ships in the correct position if the retaining clip was still in position when you got it. If the retaining clip is not present or if it detached, then center it before proceeding.) Replace the steering column cover, ignition ring, and reattach the steering wheel as per the original guide instructions. Reattach the battery and check for horn function. Return to tooting your own horn as appropriate.