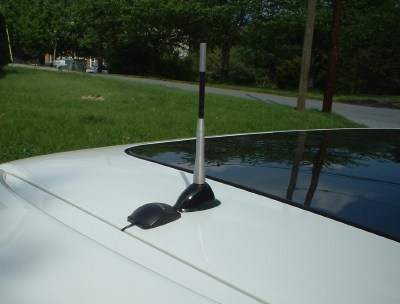 There is a very easy and inexpensive way to get XM radio in your ’02-06 MINI. The install process described below can be done with simple hand tools, and takes less than 20 minutes. I became interested in satellite radio for a couple of reasons: first and foremost, it’s a gadget and I’m weak when it comes to gadgets; and secondly, the FM reception where I live is not so good. I already have the AUX input port (MINI part number 82110153367) for my iPhone but I’m tired of the music I own and too out of touch to know what new music I might like. So, instead of buying more music, buy a better music source. Carpe dealum.

The Mini H/K stereo is satellite ready. The head unit will work with either Sirius or XM. The OEM option from the factory was for Sirius and cost about $500 installed at the time. There was also an XMdirect kit available for about $300 without installation. Either of these two systems have the advantage of integrating with the head unit and hiding away completely in the coachwork. The station/song info plays on the head unit and the multi-function steering wheel can control it. The disadvantage was the cost. I eventually found the parts to install it myself for about $175 for the Blitzsafe and XM-Direct Kit.

The advantage of the XMdirect over a portable system is the ability to control it through the multi-function steering wheel. The install took about 20 minutes. I decided to place the antenna on the roof behind my existing radio antenna. Route the cable down to the boot. The XMdirect control unit went into the boot storage area next to my radio booster. A connection kit from Blitzsafe connected it to the CD changer controls. Too easy…

Here’s how to install it:
1. Start with the antenna. I placed mine behind the factory radio antenna. Open the boot, pull back the rubber grommet around the wire bundle and work the headliner free from the roof at the top. You can feed the antenna wire through the hole into the car, then grab it between the roof and headliner. Route it around the boot opening and into the side storage compartment where your radio is located. Be careful where the cable wraps around sheet-metal. You may want to add some electrical tape to reinforce the cable so it doesn’t rub and cut the wire.

2. In the storage compartment in the boot, passenger side, find the factory stereo lead that would plug into the CD changer if you had one. It’s usually on the bottom, below the radio boost if you have a HK system, toward the front of the car. You plug the Blitzsafe unit into this connector.

4. Turn on your radio and push the Mode button. You will see Sirius flash on the screen even though it’s XM. If you have a clear view of the southern sky, you’ll get channel 1. If this works, call XM and activate your radio. You’ll need the radio serial number. If it doesn’t, check your connections, turn off the stereo, turn it on, and try again.