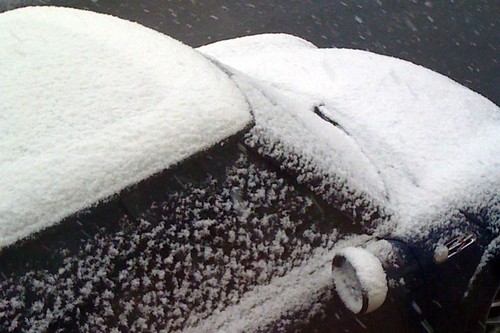 I’ve had my MINI for 6 years as of last week. About the time it passed it’s six birthday in September, I started hearing a hooting sound — sort of part barn owl, part Stanley Steamer. It took a while to figure out where it was coming from. After initially thinking it was a faulty PCV valve, I was able to isolate the sound to the power steering fan.

The MINI has an electric power steering pump that is not cooled by the air flowing under the car. To keep it cool, MINI added a small fan. The bearings on mine must have been about worn out. It kicks on once the car has warmed up sufficiently. That’s why I was only hearing it after 10-15 minutes of driving. The original fans also did not have any sort of cover, exposing the fan blades to road debris and causing it to fail for many owners of 2003-2004 model-year cars.

Replacement is a 15 minute job. The replacement part is Part # : 32 41 6 781 742 and costs about $150. Put the front of your MINI up on ramps/jackstands to easily get to it from below. In the photo above, the front of the car is to the right. That large bolt is the oil drain plug. To the left in the photo, remove the two nuts that hold the fan to the sub frame, lower the old fan and disconnect the electrical connection. Installation is the reverse of removal. (I love saying that.)