When deciding the feature set of the first generation Cooper S, MINI USA decided not to make the rear fog light available in the USA. The rear tail lights of the 2002-2004 cars were actually wired for it (and could be modified to function as additional brake lights), but from 2005-2006 the cars shipped with a blanking plate in place of the center mounted rear fog light. That always bothered me. It’s bad enough that the faux grill inserts in the rear bumper don’t actually do anything, but the center mounted plug is just stupid looking. Fortunately there a couple of options if you want to do something about it.

The light is MINI part number 63247166015 and it should cost under $30, including the bulb and socket. The plug is removed by using pry tools on either end from the back side of the bumper cover. You should be able to reach it without having to drop the exhaust, but do not try to pry from the outside until you pop the tabs from the back.

Besides the new fog light you will need to add a circuit for power, a switch (with relay), and wire the light for power and ground. I chose to wire the switch to a circuit that always has power. I used a Rigid Industries Lighted Rocker Switch wired to the left side of the parcel shelf under the steering wheel. The switch is out of the way so it won’t get accidentally engaged, but bright enough to see as you get out of the car if you forget to turn it off.

So why don’t you just add a switch in the blank spot on the switch panel? Because it’s not a mechanical switch panel. Those are actually electronic switches, so adding a switch to middle is not as easy as just drilling a hole and mounting it from the back.  If you had one that was very shallow, perhaps you could, but I didn’t want to risk it. I have the Euro Parcel Shelf, so I added the switch into the blank plate on the lefthand side. 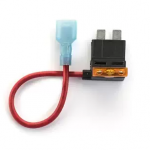 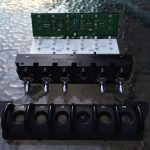 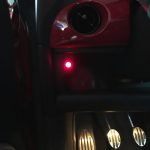 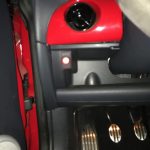