So after a year and 23,750 miles, what advice can I offer someone in the market for a new MINI? Here are some observations in no particular order: 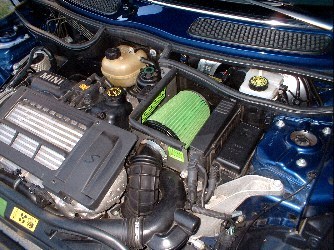 My old Alfa GTV was very free-reving. You press on the gas and let up and the response was immediate. With the MINI gas-by-wire system, it took much longer to wind down when you let off the gas. Under steady pressure, it responded fine, but with quick changes it seemed to lag. I had read online that this was a function of restricted air intake as much as anything else. To test this, I bought a cold air intake system from with a Green Filter. The kit was very easy to install and only took about 15 minutes with simple hand tools. I was worried the open system would result in increased intake noise, but I can’t say I’ve noticed much of a difference. I do, however, notice a much improved throttle response.

Since I’ve had my Mini, I’ve always appreciated the go-cart like handling, but the 17 inch run-flats provide a harsh ride, especially on the roads around DC. Over the past year I’ve learned much about how the various components of the suspension interact and effect the handling characteristics of a car. I was surprised to learn that the large wheels so popular on cars today are more about “bling” than performance. (“Bling” is a technical term. See: Oxford English Dictionary) Maybe I’m a bit old school, but the large wheels and ultra-low profile tires just don’t look right to me.

One basic approach to suspension engineering is to start from the chassis and go out. What sort of ride height do you want? Stiffness and roll? Sway-bars? How big must the brake disks be? Once you’ve sorted that out, what sized wheels should you have? Remember back to high-school physics where you spun a wheel and used the wheel to spin you on a stool? The same thing applies to automotive engineering. With cars, it’s called un-sprung weight. It’s the total of all those parts that contact the ground and move with your wheels (sway bars, control arms, suspension, wheels, tires, rotors, hubs, etc.) Less weight is better. In general alloy weighs more than rubber, and run-flats weigh more than non-runflats. Heaver wheels/tires take more effort to start rolling, stop, and turn. Wheel size therefore is a compromise between being large enough to clear your brakes, but not too large to present a high side-wall tire which will flex too much on cornering. All this while retaining the same overall diameter of your stock wheel so your speedometer is still accurate.

I enjoy the grip of my Goodyear RS-A Run-flats, but not the harshness of the ride. The R-85 (S-Lite) 17×7 inch wheels and 205/45VR17 tires weigh 50 lbs each. My test wheel is a 15×5.5 inch R82 (Silverstone) wheel with Conti CH95 175/65HR15 tires that weigh 30 lbs each. That’s a savings of 80 lbs in unsprung weight. The trade-off is the loss of 120mm of rubber contact with the road. A 40% weight reduction with a 15% reduction in the contact patch (and possibly traction.) My impression so far is that the harshness is gone from the ride. The car seems to stop more quickly and the steering feels lighter. I’ve also noticed a higher tendency to squeal the tires on corners, but not a feeling that I’ve actually lost traction. That may be due to the dynamic stability control system being more active, but still in control.

What’s next? I’m very satisfied with both changes. I think I want to buy a wider tire, however. I’ve read very good reviews of Falken Ze 512’s (top rating by consumer reports as well.) The 195/60HR15’s are only about $39 each. That size is only a 5% reduction in the contact patch, but the same weight as the Contis. If that works out ok, I’ll sell my S-Lites on ebay. 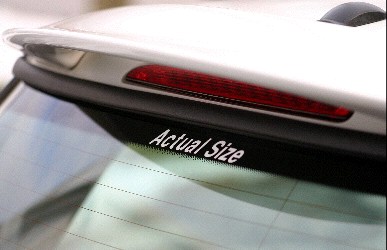 Several people have asked about the “Actual Size” sticker on the back of my car, just under the third brake light. People at gas stations always comment “It’s so small…” to which I reply, “No, actually this is actual size.” I got it free from a posting I saw on North American Motoring, but there available for a few bucks from a number of sources. 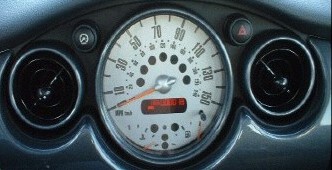 This was a first for me: I found the car I wanted on the web; called to make arrangements to purchase it; then bought it sight-unseen. I’ve test driven several MINIs, but still I was a bit uneasy about making such a big purchase this way, but the whole process went very smoothly. I flew up to Long Island, picked up the car and drove back in one day. I’ve never had a car with less than 20 miles on it before. 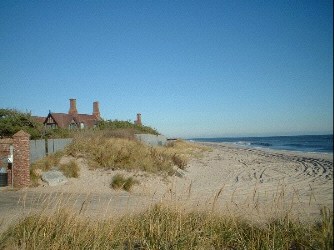 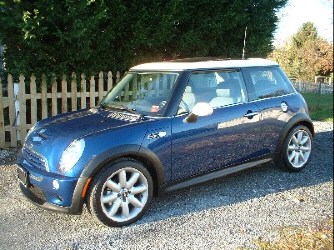 What a joy to drive. I don’t have to worry about what system is going to malfunction or if my cell phone has a full charge any more. Just the fact that I can turn the key and not have that moment of panic that it won’t turn over. Life is good.

Now begins the process of fitting in all the nice-to-have things. I installed the Mini Aux Audio cable yesterday. I chose to place it under the toggle switches and it really looks nice there. Now I can play my iPod through the HK stereo.

It has been almost two months since the decision was made to sell my trusty old Alfa Romeo and buy a new car. Tomorrow I’m flying to NY to pick up my Indi Blue, MINI Cooper S in Southampton. Why fly to NY to buy a car? Well, that’s an interesting story…

I first started thinking about getting a new MINI Cooper while I was still in Afghanistan last Spring. Afghanistan is not the motoring capital of the world (for 10 years there were no rules about even which side the driver should be on, right or left…) With little to do, save dodging the stray rocket, I had plenty of time late at night to go online and configure the MINI of my dreams.

When my wife realized I was serious about wanting the car, we made a deal: two-for-one. I could get a new MINI if I sold both the Alfa and my truck. Having no particular attachment to the truck, that was an easy deal. The Alfa on the other hand was a different story.

I’ve had the Alfa since 1985. Parting with it was something akin to putting down your ailing dog — you know it has had a full and wonderful life, but you’re so attached that letting go is tough — even if it is the best thing to do. (If you aren’t a car person, you won’t get this, so skip ahead.) At some point you identify so closely with your car that to give it up is to give up your past. Maybe you reach a stage when you don’t remember the good times and think about only the repairs yet to be made (rust, cranky transmission, leaking windows). One day, you wake up and see all this as not a challenge, but a burden. You realize that the chances of ever stripping it down to bare metal and getting that show quality finish are about the same as your chances of winning the lottery. For me it happened while at a gathering of Alfa owners at a swap meet.

I realized the other owners deep emotional attachments were, for the most part, because they bought the cars in their youths and they have stayed with them. To get that relationship, you have to buy new. So where do you want to be when you’re 60? With a 20 year-old new classic or with a 50 year old antique? That and the constant financial load associated with slowly replacing every part on the car convinced me it was time to let go. But my Alfa found a home where the car’s problems will be fun challenges again.

This is the first time I’ve purchased a car sight-unseen, but not the first time in a MINI. I was in San Antonio for training a few weeks ago so I stopped by the local MINI dealer there. I told the salesman I wasn’t going to buy from them, but would like a test drive anyway. He agreed, but said he had to drive it off the lot and then we would switch and asked me if I would like the “Italian Job”. Not understanding the movie reference at the time, I thought this was some obscene request. Seeing the confusion on my face, he quickly added, “You know, like the movie?…” Not wanting to seem out of the loop I agreed. He floored it off the lot and into a tight left-hand corner and I was sold. Great sales technique.

Why NY? The MINI is so popular here in the Mid-Atlantic that they don’t stay on the lot for long. Most dealers say 75% of customers custom order their new cars. The wait is down from several months to around 8 weeks. Since they know a car on the lot is worth two on order, they pile every extra dealer installed option on to boost the price. So to avoid paying several thousand dollars above list, I found a dealer in NY who is not doing this, MINI of the Hamptons. They have a very seasonal business being on Long Island, so once summer is over, they really work on recruiting sales through the internet. The deal was easy to close and they seem very nice. I’ll know tomorrow if it is a good idea to go out of state to buy a car or not.