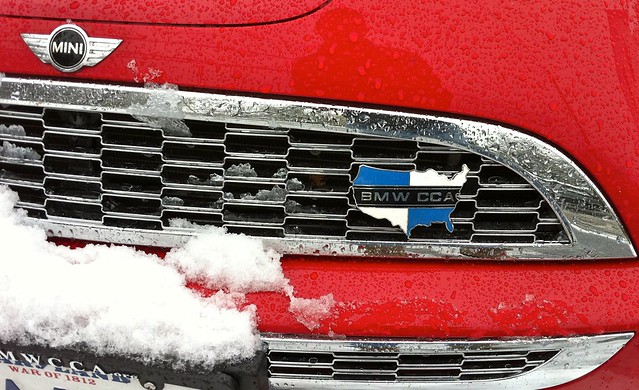 Somebody must have hit the fast forward button on Autumn. We had our first winter snow storm yesterday — much too early in the season. It was a great day to get caught up on watching movies, sorting photos, and editing videos. Much has been happening at GeorgeCo in the last three months. Let’s get caught up. 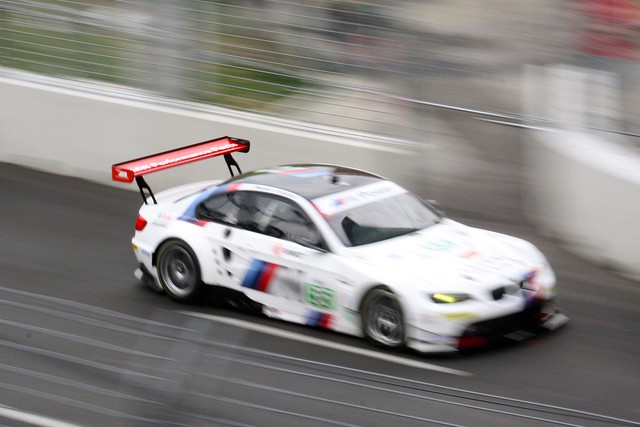 Labor Day weekend brought the inaugural Baltimore Grand Prix to the Inner Harbor of Baltimore. (Click the photo above for the complete set.) The three days of racing got off to a slow start as the track was about half a day late opening up to practice, but once it did open, Balmer put on an excellent show. Crowds were strong all three days and the racing was solid. The local BMW club had a hospitality tent and a car corral which proved great fun and also gave GeorgeCo an audience to advertise the GeorgeCo E30 powered by Beano for sale. GeorgeCo even got to meet Bobby Rahal (he signed my hat.) 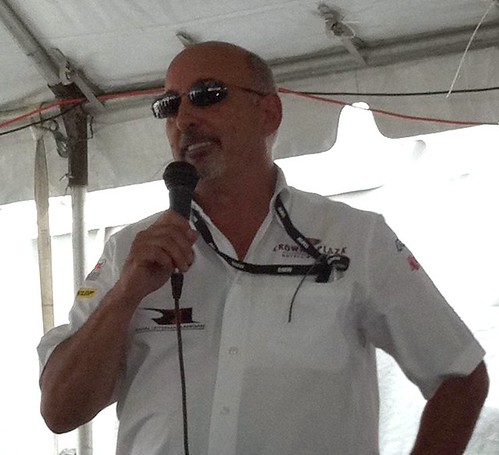 At the end of the day, we even got to drive the track. (GeorgeCo thought he was in a traffic jam to leave. Much to his surprise, traffic turned left instead of right, and we found ourselves on the track.) Pratt Street was bumpy at parade-lap speed, I couldn’t imagine what it was like at 185 MPH.

The beginning of October brought the final NCC BMW CCA Drivers’ School of the year. This time we were on the Jefferson Circuit. Rain turned most of the driving into one big skidpad exercise. But even at super low speeds with no grip, the Jefferson is tons of fun. Mid-day on the last day, the sun came out for a while and we got to take the new GeorgeCo MINI out for a spin. The video below shows the GeorgeCo MINI wearing regular old street tires, chasing down a certain Red M36. I still haven’t mastered getting the helmet-cam on straight, but this video is better than most.

The big news of the month, however, has to be that the GeorgeCo E30 Powered by Beano has been sold. The buyer is an enthusiastic autocrosser who will give it a good home and the attention it deserves. Scuderia GeorgeCo has now gone from a high of five cars, down to a more reasonable three. 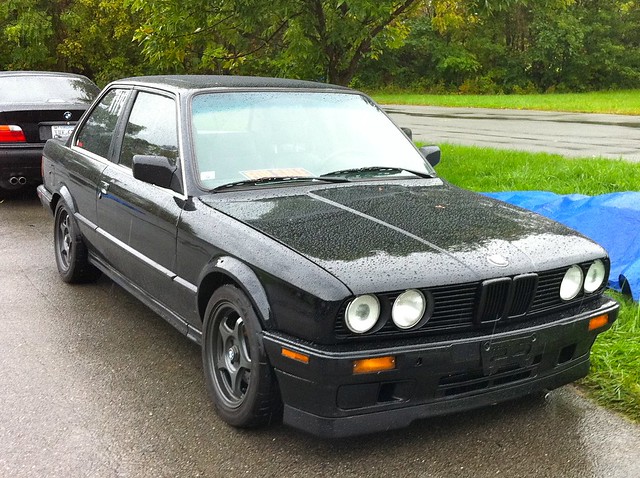 After a bit of a summer break, GeorgeCo was back at the track with the National Capital Chapter of BMW Car Club of America to instruct for 3 days at the Summit Point Main Circuit August 5-7, 2011. We ran the GeorgeCo E30 Powered by Beano on Friday and the GeorgeCo Blue MINI on Saturday and Sunday. I had two students this time out. My A Group Student was in an E36 M3 and my B Group Student was in an E30 much like mine. Both accomplished GeorgeCo’s Objectives for any Drivers’ School: 1–Have fun. 2–Learn Something. 3–Return home with your ego and your car undamaged. 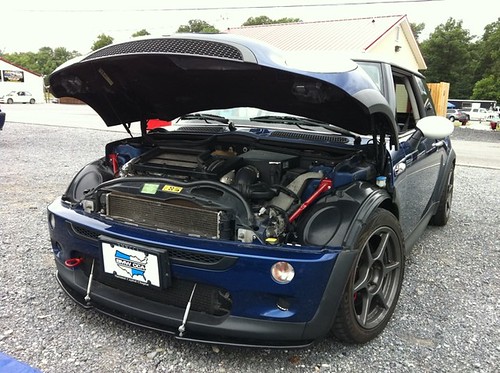 The MINI is sporting a couple of new mods designed to improve brake cooling and reduce flex under braking. For the brake cooling we took a trip to the local Ace Hardware to get some ducting. Having previously removed the fog lights from the bumper cover and cut a hole in the wheel liners, we connected the two with some ducting to improve air-flow behind the wheels. At the Shenandoah in similar weather in June we saw brake caliper temps in excess of 650 degrees. This weekend, temps stayed below 600. Tough to say if it was from the improved ducting or just the differences in the two tracks, but $15 for a little insurance is well worth it. To firm up the chassis you will notice the red convertible chassis braces in the photo above. Not seen is the lower stress brace that reinforces the link between the sub-frame and frame. This was on sale a few months back so we snapped one up. Install is dead easy and can be done in about 10 minutes. 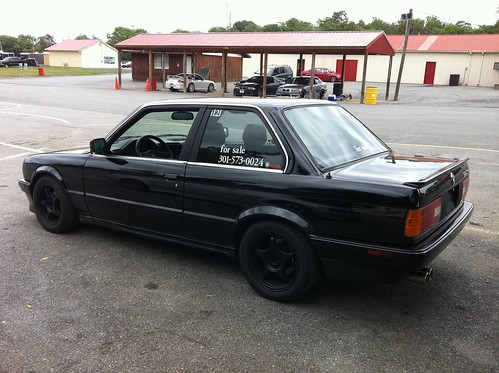 We got a break in the harsh summer weather we’ve been having here in the Mid-Atlantic and took full advantage of it with 3 glorious days at the track. We had a bit of rain on Saturday afternoon which spiced things up a bit as seen in this first video.

But once we came to grips with the lack of traction on the transitions to the patches, lap times dropped down to within a couple of seconds of our times in the dry. After the rain, the track never had the same level of grip as it did on Friday, but it did give us a chance to try out a new camera angle with the GeorgeCo RePlayXD camera.

We’re also still perfecting the Helmet-cam, but this video gives you bit of an idea of what is meant by keeping your eyes ahead of your hands. Watch for the head to turn before the turn-in point in the corners.

The local BMW club arranged a Dyno day down at York Auto which is just down the street from GeorgeCo world headquarters. Now that the GeorgeCo E30 has a fresh coat of paint, we figured it was time to dial up some power. Since good tuning starts with a good baseline, we backed the E30 on to the Dyno and made a couple of pulls to see what we had. The GeorgeCo E30 left the factory in Regensberg 22 years ago with about 170 hp at the crank. Assuming a 15% driveline loss, that should translate into about 144 hp at the wheels. Given that this engine has over 230K miles and very little modification, we were hoping to get 135 hp on the dyno. The only mods are a cold air intake (which really doesn’t help the E30 but looks good); a header; and a “performance” chip from a reputable supplier who shall remain nameless.

After a couple of runs to calibrate the Dyno, the results came in at only 125 hp. That’s a 14% loss from new and a bit disappointing. It turns out the air/fuel ratio (AFR) was way out of tolerance. In naturally aspirated engines powered, maximum power is frequently reached at AFRs ranging from 12.5 – 13.3:1 or lambda of 0.850 – 0.901. The AFR runs rich to 5000 RPM then lean to redline. The risk in running too rich is that the combustion chamber is washed by the excess gasoline, effectively cooling the burn (reducing efficiency) but also washing away the lubrication protecting the cylinder walls. As it leans out, it could damage the engine because of pre-detonation.

What’s the solution? The WAR Chip by Miller Peformance. WAR stands for Write and Remap. It is an infinitely rewritable chip solution for ECU tuning. It can be tuned from a laptop PC via USB and can store 4 separate tunes that can be switched on the fly without a laptop. We installed the chip following the simple instructions that were included and turned the car over to York Auto to dial in the AFR and put it back on the dyno. Initial results were promising with the preloaded tune from Miller Performance getting up to 135 whp out of the box.

Then when we broke the intake rocker on #6 cylinder and put a halt to progress. Since we have to take the timing belt and cam gear off to get to the rocker, it’s going to be a while before the GeorgeCo E30 is back on the track. 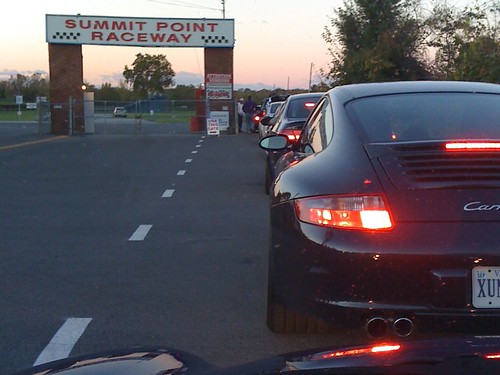 After an extended summer break I’ve finally gotten back to the track for a few days. In September it was for one day on the main circuit at Summit Point instructing for the Colonial Challenge Cup charity event, then three days this past weekend instructing with the BMW club.

Here’s a picture of my car at the skidpad. 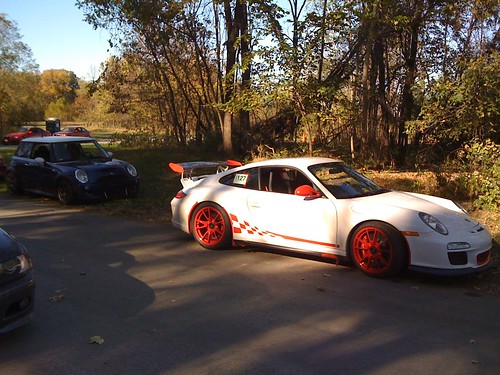 The CCC events are fun if a bit chaotic, but I really like the BMW events. This time I was instructing on the skidpad. I had forgotten what it was like to work with beginning students and how much fun it is to see when they start to get it: you really can’t add more steering when in understeer…

I had an interesting moment under heavy breaking in turn one when I ran through some anti-freeze just as I started to turn in. In the first part of the video, you can see my normal line through this corner. In the last part, you see the fluid-induced lane change. If you pause it, you can see me pointed about 15 degrees to the right at 80 MPH.

I ran the GeorgeCo 325is Powered by Beano on Friday, but have a front wheel bearing starting to go so chose to run the MINI for the rest of the weekend. For the most part I could hang with the E36 and E46 M3s. I lose about five car lengths on the front straight to the higher horsepower cars and the make it up under braking into turn one. I’d have to be careful through the chute not to run up too quickly on the heavier cars. I think the larger JCW brakes made a huge difference to how late I could brake.

Here’s an interesting video comparing the MINI to the E30 on the track. They are remarkably similar.  May take a few moments to load. Here’s more video from Saturday.