I found that the intercooler hood scoop tended to scoop up leaves, bugs, and cigarette butts. Maybe it was just because I was doing a lot of driving in NJ (sorry). I saw a MINI catalog featuring a grille and thought I might try to make one myself. Putting a screen to keep the junk off of your intercooler will sacrifice a certain amount of air-flow and I suppose there is some risk of having snow and muck block it as well, but if it’s that cold out, I don’t think it will matter. I much rather have to stop to unclog the scoop than pay for a new intercooler. (And as I would later find out at the track, it helps keep the rubber klag out as well.)

Remove your air scoop by removing the two screws and two bolts that hold it on. Take care not to let the trim piece fall from the hood. There is a gap between the scoop and the trim piece that seems to have been built for this purpose. Trim a piece of cardboard to get the right shape then cut out a grille from a piece of $2 Gutter Guard from the Home Center. Paint the edges with flat black paint to prevent rust. If that’s too complicated for you, send me $5 and I’ll mail you one. Motor on.

Updated: January 2015: The mod comes courtesy of Richard Lin, aka OctaneGuy. He used to maintain a website called Littlemini.us and the instructions and photos below are from an archive of that site since it isn’t active anymore.

Minis sold in Europe come equipped with rear fog lights. MINIUSA didn’t think the U.S. market would want them, so the U.S. spec cars didn’t have them, even as an option. Cars shipped to the U.S. were prewired for them and since it’s easier to not have to customize your manufacturing process, they also have the light sockets (including bulbs) in the regular rear light housings, just no switch and no programming to operate the lights.

After some intensive lobbying from loyal Miniacs, MINIUSA authorized a retrofit. So by replacing the toggle bank with the one having the missing switch, U.S. owners can have their cars reprogrammed to have functioning rear fog lights too. That works out to something like $200 for the switch bank and $50-$100 to have installed and programmed. And if you want to install the switch bank yourself, you have to figure out which of the 12 versions listed in the parts catalog is the right one for your car. Another option is to use the lights for another purpose such as to double the amount of brake lights available from 2 to 4 lights.

For less than $2 and about 10 minutes of your time, you can place a diode in the wiring harness that will switch on the unused fog lights when you activate the brake lights. The neat thing about using the diode method rather than merely jumping the wires, is that you do not lose the fog light functionality if at a later date you want to add the extra toggle and reprogram for the lights. If you merely jump the connection, then when you activated the fog lights you would also activate the brake lights. That would be bad…. Below are the instructions originally from Richard Lin’s website. It works on all Mini’s through the ’04 model year. If your back-up light is NOT integrated into your tail lights, this will work.

Like all other guides on this website, this is intended as a general reference. Proceed at your own risk. This should take you about 10 minutes to complete.

In order to make this mod, you need to remove the rear access panels in the boot. You then want to unplug the connector for the brake lights. There is a release clip that you need to pinch in order to remove it. 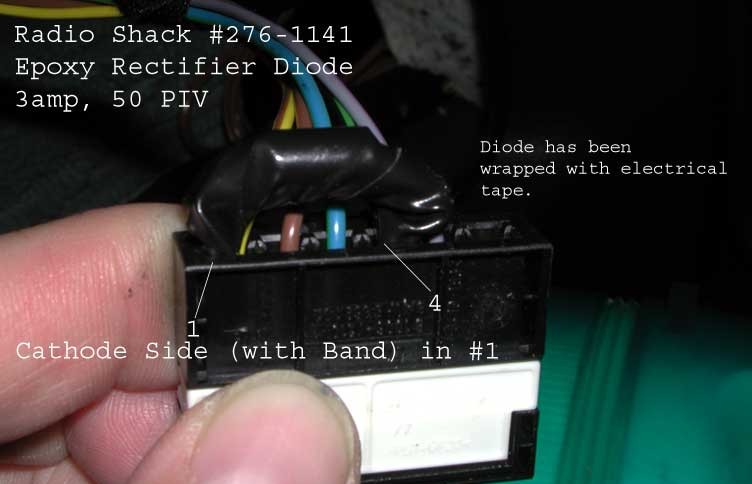 Hold the straight diode up to the connector. You will want to bend each end 90 degrees to make a U shape with the width in between the bends approximately the distance between wires 1 and 4 on the connector. If you bend the diode leg after the 90 degree bend into a Z pattern and push the Z into the connector it will hold better. Wrap the diode in electrical tape before inserting it.