One day you will pull up on the ebrake handle, and one of two things will happen: 1. Nothing. or 2. It goes almost to vertical before it grabs.  If #1 happens, you’ve broken both cables. If #2 happens, you’ve only broken one side. In this post, we’ll walk you through the steps to repair one or both of them.  This is not a difficult repair job, but it can be time consuming.  You will need to get your car on a lift or jackstands, and you will have to remove the heat-shielding along the back half of the exhaust tunnel. You will need a deep 10mm socket with extension, a 10mm wrench, PB Blaster (or WD40), and a new cable. The cable part numbers are 34406777399 (right side) and 34406777400 for the left side (not interchangeable.) New cables run $30-$50 each. 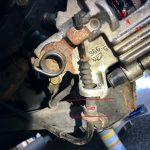 First determine how much of a problem do you have: one or both sides? Take a look at where the ebrake cable attaches to the rear brake caliper. (You may have to put the car on jackstands and take the wheels off to see.) If you see that the end is still attached, but the housing has slipped out of the holder — that gap indicates that the cable is broken. Check the other side before you order parts. In our example, just the right side cable had snapped. 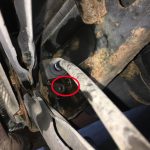 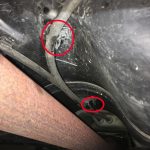 required here.  The screws may be easy, but the nuts may be corroded.  That’s where the PB Blaster comes in handy.  Once you’ve removed the heat shield, note the routing of the cable housing and remove it from the clips. Notice how the cable passes through the chassis into the 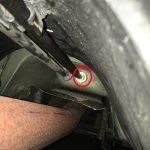 Now switch up into the passenger compartment.  Pinch the ebrake boot and pull up on the frame to remove it from the center console.  You just need to pull it free of the console, don’t remove it entirely.  This just makes the console easier to maneuver.  Gently pry the four corners of the console to pop it off, pulling straight up.  This will expose the frame. 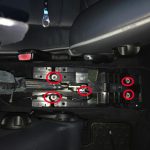 Unplug the wire leading to the handbrake handle and remove the four 10mm nuts. The frame will pull up and out of the way, exposing the junction of the cables.

The photo shows how the end of the cable has sheered off. 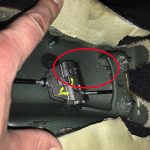 Now take a look at your replacement cable. See the clip on the end?  Note how it retains the cable in position once installed. You have to relieve this clip to free the cable.  BMW makes a special tool to do just this, but you can use another deep socket instead (7/16 inch 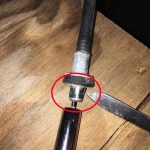 in this case, but yours may differ).  Just place it over the end and press it over the housing to free the cable.  Once pressure is released, it will push free. Now pull the broken cable free from the underside of the car.

Installation is the revers of removal (I love saying that.) Set the cable through the chassis first. Thread the ball into the junction carrier. (You may have to create slack on the handle.  There is a 13mm threaded rod under the handle.  Back out the nut until there is enough slack to slip the ball into the carrier.)  Go back under the car and press the housing back into the brackets and reinstall the heat shielding. Use the bolt to reattach the bracket into the subframe, being sure to line up the tab on the bracket. Now thread the cable end through the 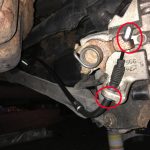 hole into the carrier. If there isn’t enough slack to attach the cable end, you may need to do two things: remove the carrier from the hub and/or go back to the handle and give it some more slack. Pull up on the handle a couple of times to seat everything and release. With the brake released check for slack between the nut under the handle and the lever. Pull up one notch.  Wheels should be free.  Pull up two notches, there should be drag.  Tighten nut if not. Reinstall the frame, reattach the ebrake wire, and replace the console and boot. Checking and adjusting: