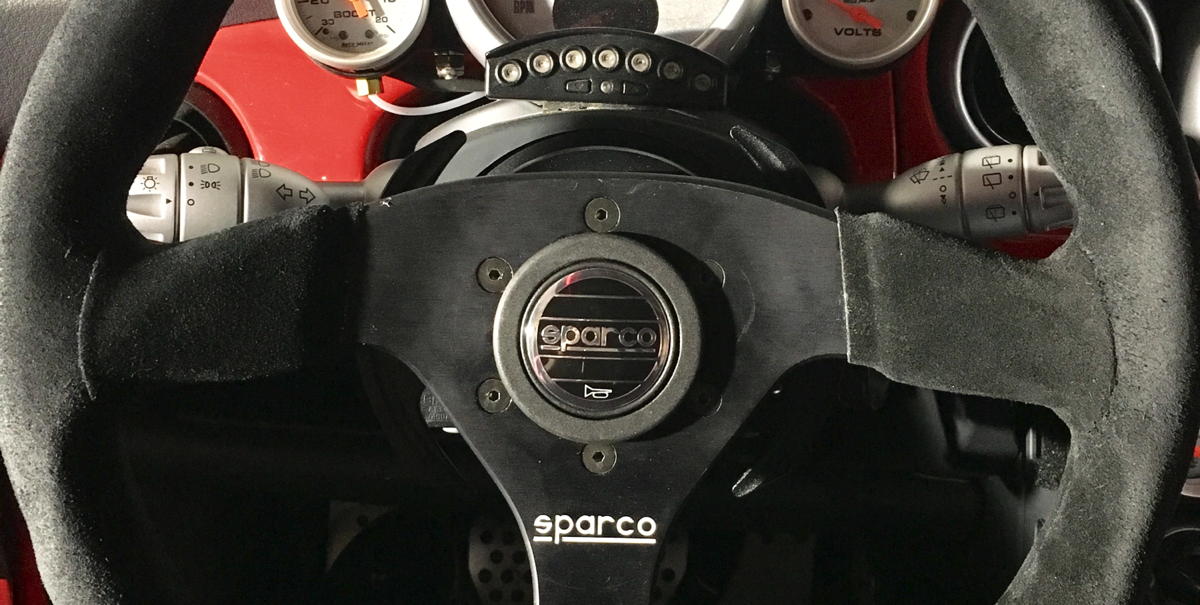 This project turned into much more of an adventure than was originally planned. The basic idea was simple enough: Install an aftermarket steering wheel and ditch the airbag on the trackcar. I knew the wheel I wanted because I used to have it on my E30. Just find the right hub; get the spacing right — no problem, right? Not so fast. If you are thinking about installing an aftermarket steering wheel, there are a few things you need to consider before you start:

We’ve covered steering wheel removal and slip-ring replacement in previous posts, so we won’t repeat the steps to remove the airbag, steering wheel, and slip-ring here. But do make sure you allow at least 15 minutes between disconnecting the battery and disconnecting the airbag so you don’t have to make an unnecessary trip to the dealer to reset the airbag light. Allow yourself a couple of hours to complete the project.

We bought three hubs which are widely available and advertised to fit the MINI steering spindle. The photo shows them left to right from Sparco, NRG, and MOMO. It turns out the Sparco one we got which is listed as fitting ‘MINI after 2001’ is actually for the classic Mini BEFORE 2001 (part number 015002038), not BMW MINI which is Sparco part number 01502183CA. So that left the MOMO and NRG hubs as contenders.

The MOMO hub is designed to place a flat wheel in the stock position. It also does not fit inside of the slip-ring eliminating the use of the horn button and turn-signal cancel function without some serious fabrication. If you want to position the steering wheel 1-2 inches closer to the driver, then use a QR. It is often advertised as being collapsible, but that’s not the case in this application. It also needs a 1/4 inch washer with a smaller outer diameter than the NRG hub.

Our goal is to have a quick release wheel in the stock position with a functioning horn and turn-signal cancel function so we opted for the NGR low profile hub and quick release (QR). The NRG hub, however, will not fit the slip-ring out of the box — both require modification to work together. 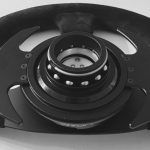 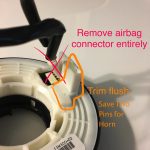 The slip-ring has a tab that fits into a slot at the bottom of the stock steering wheel at the six-o’clock position. This positions the tab at the center of the slip-ring correctly to perform the turn-signal cancel function. This position places the horn and airbag wiring connector at about the two-o’clock position which more or less lines up with the slot in the NRG hub. The connector and plastic protrusion on the slip-ring are in the way so we’ll remove them. 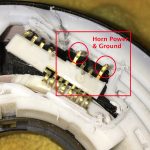 Once we removed all of 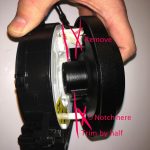 the protrusion, we checked the quick release lower receiver horn wires and made plug-in connectors to match. We then soldered these wires to the slip-ring and cover everything in electrical tape. 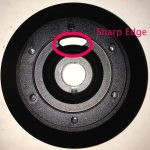 Now take a look at the slot in front of the hub and notice the sharp edge. Grind the edge down to provide relief to the wires and make sure they don’t cut through the insulation over time. Paint and then cover the edge of the slot with electrical tape for good measure and you are almost ready to install the hub. 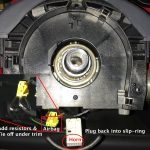 Before you install the hub, place two resistors into the airbag connector formerly plugged into the slip-ring and zip-tie it back out of the way.

Now it’s time to put it all together:

If everything works, take the wheel off and reinstall the trim. 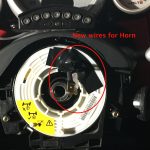 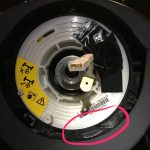 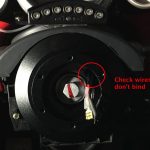 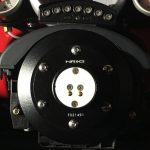 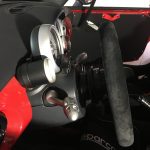 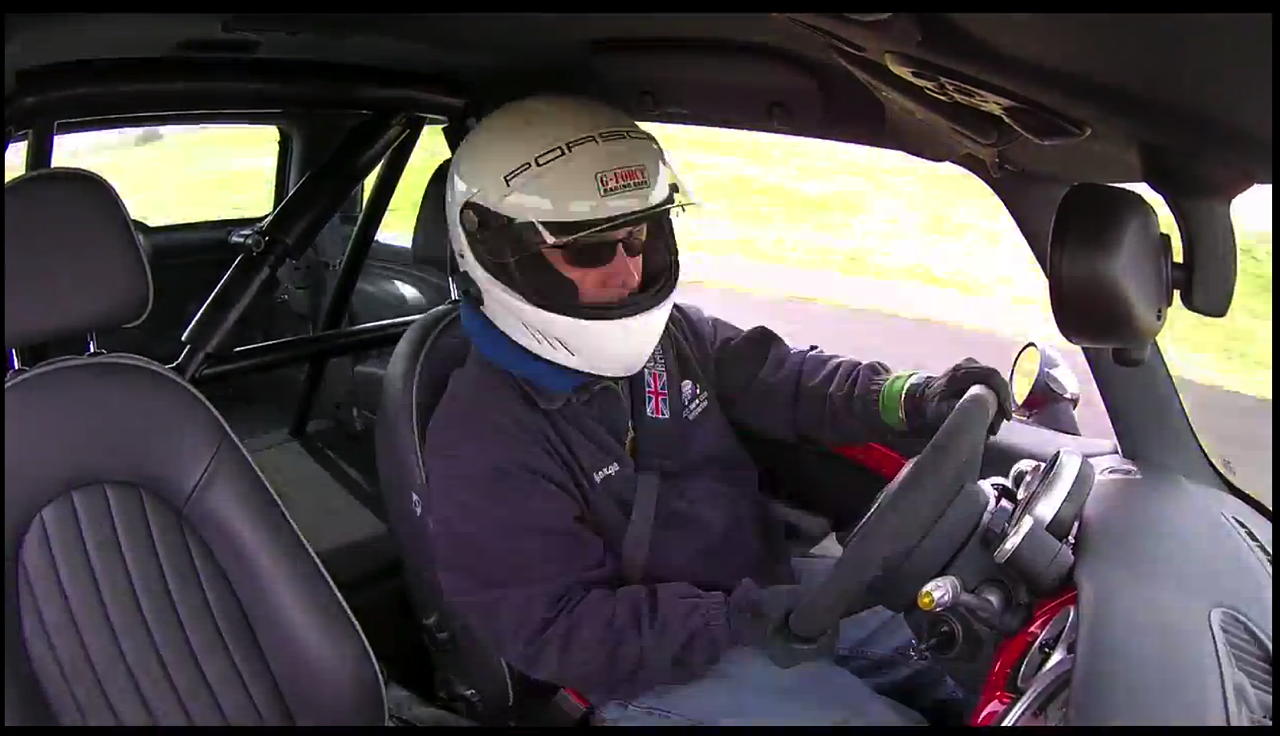 You may remember this video from my last track weekend.

Well, we decided it was finally time to put some competition seats in the GeorgeCo MINI. Since this was our first time trying to put this combination of parts together, we thought we’d document the progress to save you some of our headaches. Safety is a very personal thing: We aren’t recommending a course of action for you, just documenting our thought process so you can decide for yourself.
If you’re like most track junkies, your disease will follow the same five-stage progression: You take your street car to the track. You get better brakes and tires. You start to trackify your car. At some point, you cross a line and it becomes a track-car you can drive on the street. Then it becomes a dedicated track-car and you have to trailer it to the track. We’re at stage 4 with this car. Still street legal and we don’t want to completely gut the interior so we want to keep the front airbags and 3-point belts for the street, yet have fixed-back seats and six-point harnesses for the track (yes, and a HANS.) So this stage presents a couple of challenges with the MINI: How to anchor the 3-point belt? And how best to position the seat?

MINI has a pre-tensioner built into the belt receptacle. In the event of an impact, the belt tightens around the pelvic bone, pulling any slack out before your upper torso flies forward into the belt. This helps you not submarine under the belt. The slight twist in your upper torso with only one shoulder restrained also helps keeps your hips planted in the seat. The mounting point for the pre-tensioner is built into the stock MINI seat, not the slider, so if you want to reuse the slider, you have to find another way to anchor the belt. We chose to use the Sparco MINI Seat Base and a standard sized Sparco Evo Seat. Eventually we want the seat on a slider, but for now, it allows us to finish the installation and see how everything else fits. GeorgeCo is not too tall (5’8″) and has pretty short legs. Positioning the seat as far forward as possible without the slider is actually about the ideal position (and since the sliders hadn’t yet arrived) we went ahead and mounted the driver’s seat in a fixed position to see what that’s like to live with for a while. By sliding the seat as far to the center as possible, we were able to get the door to close without removing the door card. It does take some getting used to in order to get out of the car without looking like a complete idiot. The passenger seat was a whole other kettle of fish.

On the passenger side, we went with the larger EVO II US seat. The “US” means “large”, but the differences aren’t really that great. It just isn’t tapered to the waist so there’s may an extra inch to an inch and a half of hip-room. The shoulder width is the same and that’s the challenge: getting the seat low enough to get helmet clearance, but not have the shoulder wing contact the door-card with the door closed. The first challenge was just getting the base to line up. Not surprising, but the center tunnel is not symmetrical. There was enough room to clear the bolt for the pre-tensioner on the driver’s side, but not on the passenger side. We ended up going to a very slim bolt head design and persuaded the mounting point (ie, hammered) to move to the right just enough to get it to clear. When you use a slide with side mounted seats, there are three components to the seating support system: the side mounts (sort of “L” shaped brackets”; the slider (“U” shaped); and the base. Seat and all three components from the same manufacturer so you’d think everything would line up out of the box. But you would be wrong. Out of the box, the slider sets the rails about 13.5 inches apart. When the brackets are attached to the seats, the mounting point to the sliders are about 14.5 inches apart. So if you have four components they can go together, what, 24 different ways? The piece that ties the sliders together to form the “U” is made of very soft metal. It finally occurred to us to just bend it and make the “U” wider. Problem solved (2 hours later…) So the passenger seat is in, on a functional slider, and in the same reclining position as the driver’s seat, but it sits about 3/4 of an inch taller because of the slider. The shoulder wings (barely) clear the door card even when fully slid back.

Here’s the passenger side with the stock seat removed. 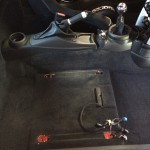 The first thing to notice (besides that we vacuumed the carpet) are the connectors. There are 5 of them, but really only two that matter. The five are for the side airbag; seat occupancy weight sensor; seat belt; pre-tensioner; and seat heater. Seat heater won’t be reinstalled on this side (but we are doing it on the driver side because we’re getting old). The seat belt and pre-tensioner will be reinstalled with the new seat base. The airbag we can bypass with a 3.9 Ohm resistor (MINI used to sell the part to do this.) So it’s the weight sensor that we have to worry about. (This is the part that recently was the subject of a recall on 2005-2006 MINIs.) It’s a non-servicable part that’s buried deep within the seat cushion, but without it you’ll get a SRS fault. 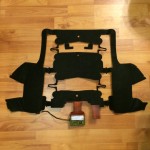 Since this one wasn’t working anyway, we decided to rip it out of the seat (it failed in the “on” position so the passenger airbag is always on, just like in the 2002-2004 cars so no worries there.) We just put it between the shell and the padding in the new seat, plugged it back into the wiring harness and good-to-go, no SRS fault. We test fitted the brackets and sliders before we figure out to bend the connecting bar as mentioned above. 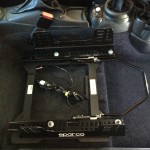 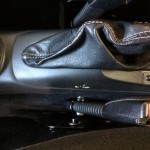 In the end, it turned out pretty well. We need to see if the seats are low enough with helmets and we still need to install the 6 point harnesses, but it looks promising. The 3 point belt is not ideal. The outside goes through the seat slot so it sits very low on the hip. The inside goes over the seat edge. But since the hip bone is still above the top edge of the seat it will still function correctly, just crush the seat edge in the event of a crash. But that will be the least of our worries at that point. 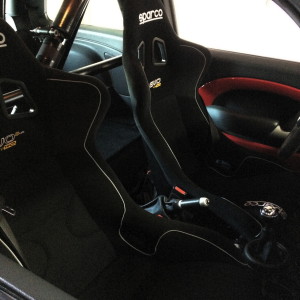 Update: We’ve added 6-point harnesses to the car since this blog entry. We’re still working on the DIY guide, but here’s a couple of key considerations. If you’re going to mount the belts to the chassis, you need metal-to-metal contact. The easiest way to do it is to drill, then add captured nuts with backing plates, but as always, check your GCR before you start. Place the inner lap belt the same distance back as the outer. For the outer, we had some eyelets fabricated from the stock bolts because of their unusual size. Finding the right point for the sub mounts proved the hardest. Check your harness installation guide and then choose the appropriate spot based on access and availability. Eventually we will weld the backing plates, but they meet the GCR without welding. 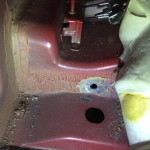 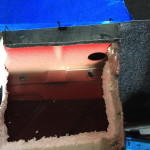 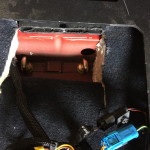 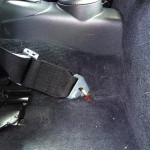 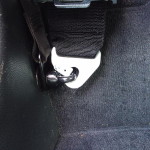 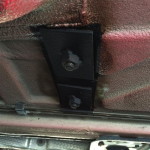