GeorgeCo went to the 2014 Washington Auto Show so you don’t have to. As far as the big autoshows go — Detroit, Frankfurt, Geneva — they just don’t compare. No really. Don’t try. The Washington Auto Show should be called “Washington Nearby Dealers New Car Show”. If you want to see the latest exotic models by Ferrari, Lamborghini, Porsche, or even cutting edge design concepts, then don’t bother going. If you want to see a bunch of new cars you can buy at your local mega dealer, then this is the show for you. 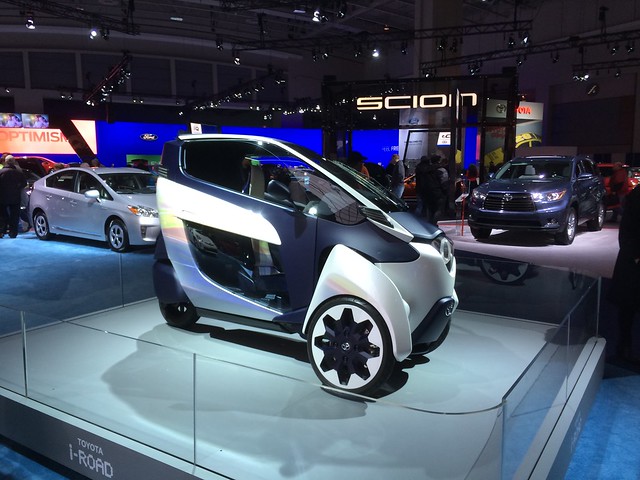 For example, this Toyota I-Road Concept is from the 2013 Geneva show. (Nobody wants to see yesterday’s concept cars.) GeorgeCo did want to see three new cars, however: The BMW i8; Porsche Targa; and the new new new MINI so we headed over to the Washington Convention Center during lunch yesterday. We got to see one and half of those cars. MINI had a new MINI Cooper S (F56) on display and BMW had an i3 (OK, not one and half, but one and three eights?) Both were locked so they were probably pre-production cars which is disappointing. Other notable cars at this year’s show are a flat-blue Audi R8; Blue BMW M4; Blue Corvette Stingray; and Red 2015 Mustang. But first, the new, new, new-MINI. 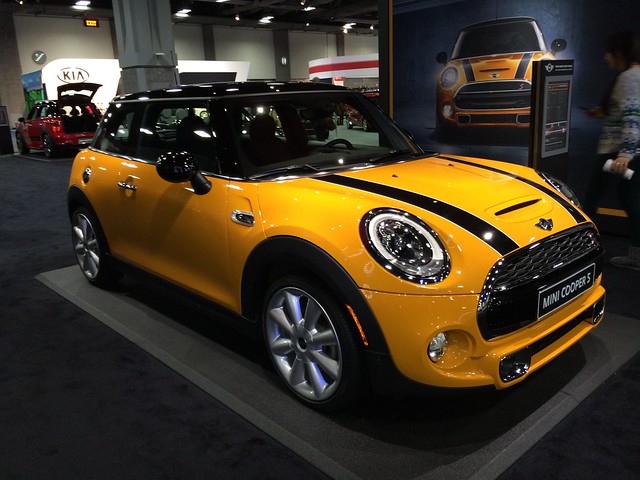 MINI F56. I wanted to hate this car and it didn’t disappoint. MINI design is lost in the wilderness. This car manages to pull off something amazing: it makes the MINI Countryman look good. MINI is clearly trapped in their own secret sauce. Ninety percent of the public probably won’t even notice that the car is new. Put it next to a previous generation R56 and it looks evolutionary. Put it next to a R50 and it just looks wrong. The shape is iconic and that’s restrictive, I get that, but the original new MINI worked because it maintained a strong design language throughout and maintained consistent proportions even into the R56 range. 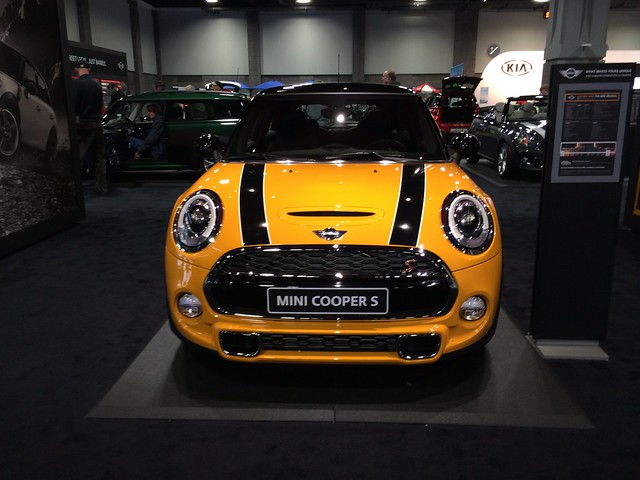 The headlights now look like they were designed by a committee that wasn’t on speaking terms. The shape of the nose is borrowed from Ford. The tail-lights are much too large for the size of the car which makes you wonder if it was one of those NASA-style inches to centimeter conversion problems. 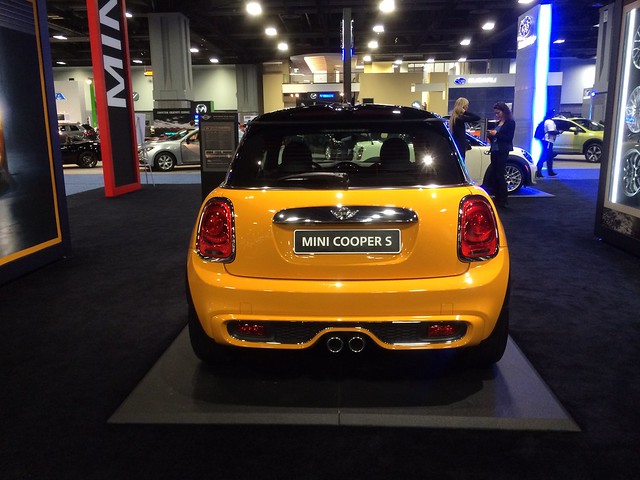 Through the locked doors, the interior is still MINI and the materials do look to be of a higher quality. MINI seats have come a long way in the last ten years and this car is no exception. The good news is that the new family of engines is promising with the base Cooper 3 cylinder offering torque to rival the R53 Cooper S and the F56 Cooper S offering JCW level performance. You just can’t help feeling that this car just isn’t going to appeal to the performance enthusiast. Most MINIs are now purchased off the lot, losing that sense of personalization that made the original new MINI so unique. Now it’s just an expensive small car and that’s a shame. 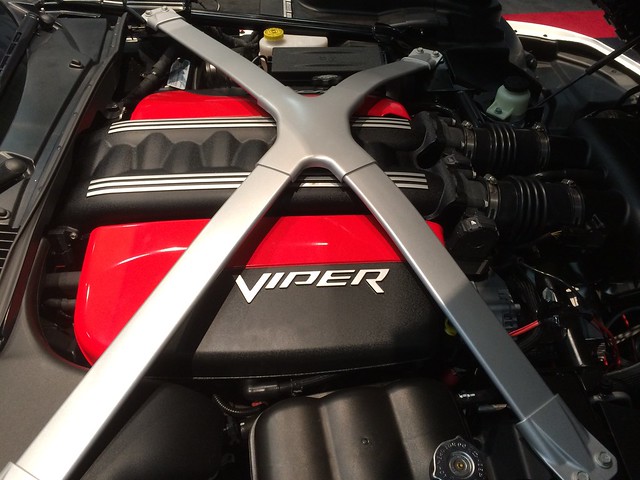 Chrysler had an engine with a car attached to it. Oh, that was the new Viper. Or maybe it was an old Viper, hard to tell. 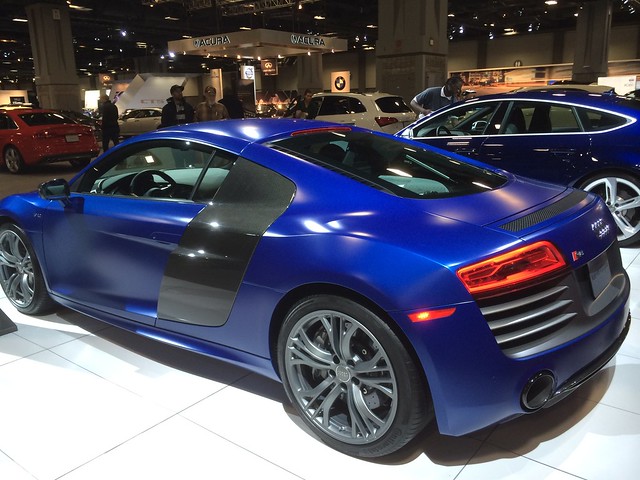 Audi had an interesting color R8 on display. Interesting as in, “why would anyone do that” interesting, not that the car was interesting in itself. R8s are not pretty cars, but they certainly go like stink. I bet the flat blue is a pain to maintain (unless it’s just a wrap, I didn’t check.) 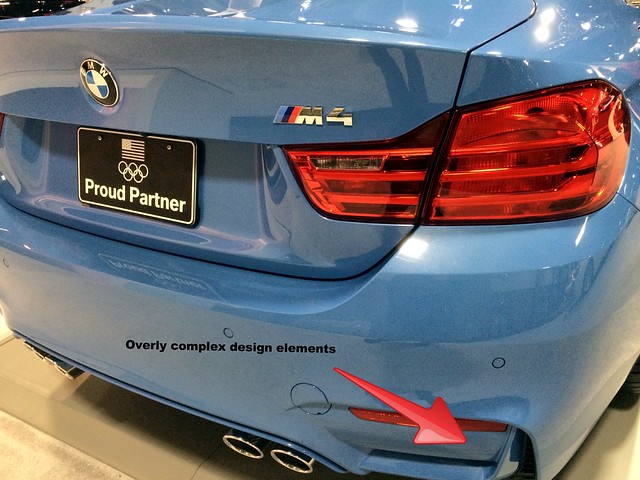 BMW had an M4 on display. There’s another car company that’s lost. BMW has decided that Coupes are even numbered and Sedans are odd numbered. So now there are two new cars M3/M4 where before there was one M3. Why bother? And who cares? They make small cars (which are inexpensive in Europe and not in the US) the 1 and now 2 Series. Sporty Performance Cars (3/4). Luxury cars for fat executives (5/6). And Luxo-barges for fat-cats (7). By extrapolation then, they must be working on a luxo-barge Coupe (8 Series.) Does the world need an M3 and an M4? No, of course not. Would we take one if someone gave us one? Absolutely, but that’s not the point: Performance used to be about driving pleasure, about power-to-weight ratio, and about fun. Now it seems to be about carbon-fiber engine U-bars (whatever that is) and air-conditioned seats. 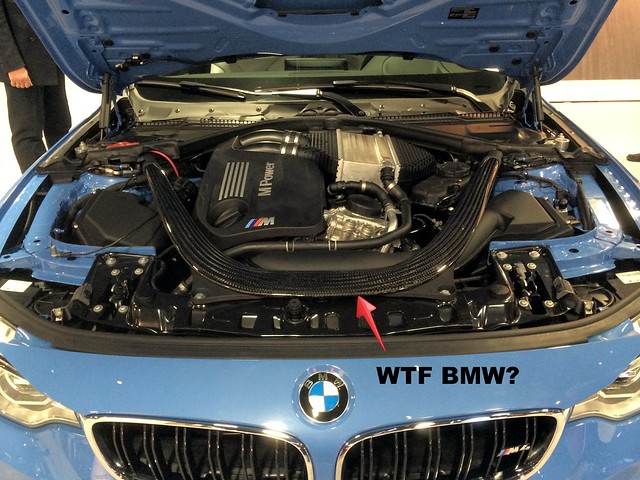 You listening BMW? I’m in your prime demographic. I’m a fan of the brand. I’ve owned 3 of your cars. I want a car that’s the size and shape of the 435i. Straight-6 normally aspirated engine. 300 hp/2500 lbs. No nav, HUD, TSC, ASC, EBC, RTTI, x-drive, AST, Lane-departure warning, adaptive steering, or electronic-anything. Give me a six speed manual, limited slip, power steering and brakes, AC and ABS. It doesn’t need a stereo, seats with airbags, xenon headlights, sun/moon roof, wood trim, or park distance control. It doesn’t even need seats, suspension, wheels/tires, or exhaust. Let me buy a shell and include just the bits I want and I’ll source everything else myself. If you do that, I’ll buy a new car. (Hint: I want an E30 with a modern crumple zones and chassis rigidity.) 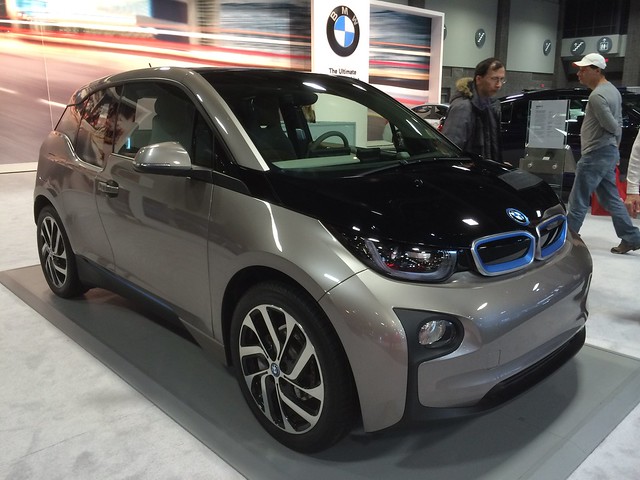 BMW i3. Ugly in the way the Pontiac Aztek wasn’t. It kind of grows on you, not from the outside but from the inside. First impression is that this is a really narrow car, but it is really very tall. The inside (again locked: bastards) is very well appointed with recycled materials and wood which was refreshing. 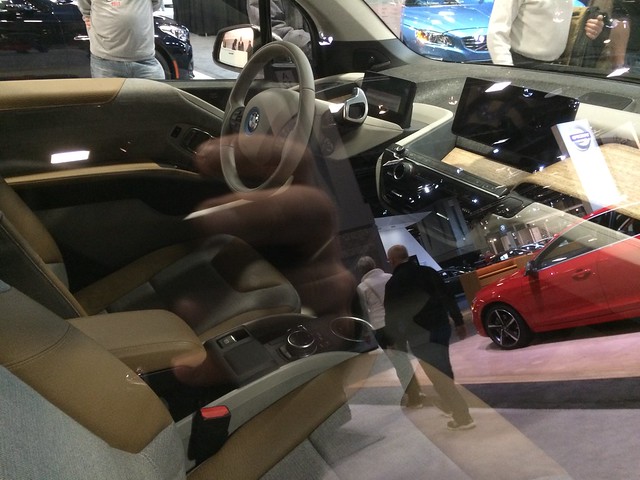 I don’t really like the execution but I like the concept. If I were 20 years younger and lived in some hip urban neighborhood in DC, this is the car (if any) I’d have. But given that I’m an old-fart living in the X-burbs, then I’ll pass. I’m almost old enough to want a Vette. 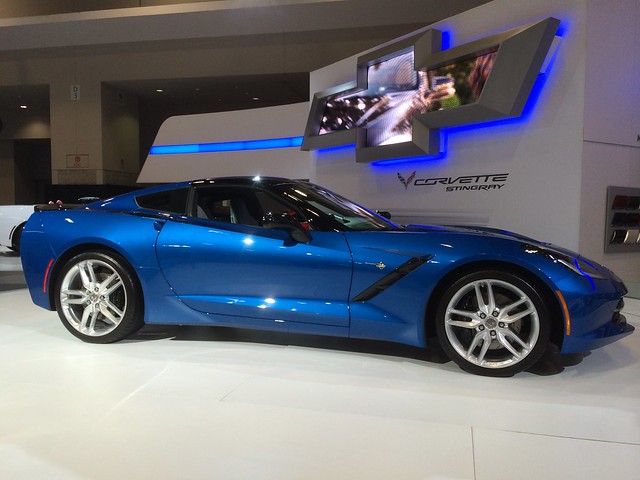 Corvette Stingray. I have a tremendous amount of respect for the engineering team what builds Corvettes after having been in a couple of C6s on the track. This is an incredibly capable car targeted at an incredibly inept market. The average age of the Corvette buyer is still 59 and will likely rise with time. Which is a shame as this is a wonderful track car. Except for the rear-end, this is a cohesive design statement that’s true to the Corvette design language. The design is angular, sort of like an F-117 Stealth Fighter, which makes you wonder if like the original Stealth, were GM’s computer design tools not sophisticated enough to plot curves? The back-end treatment seems overly complex. 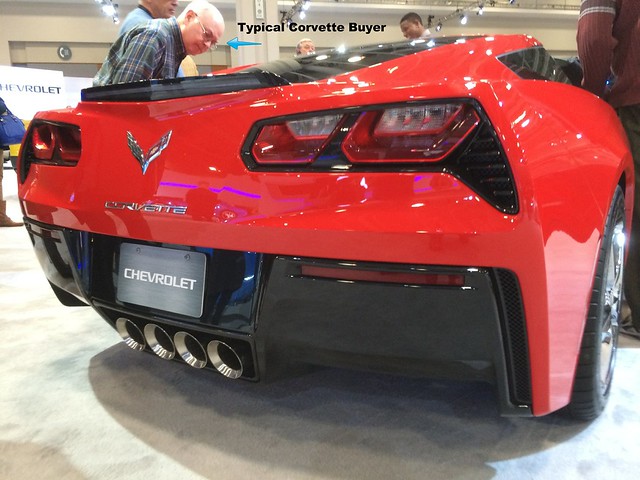 And why did they include tail-lights from last year’s Camaro? The tail-lights are iconic on a Corvette. If you try to include anything into a new design, that’s one of those elements you keep on the “must include” list. 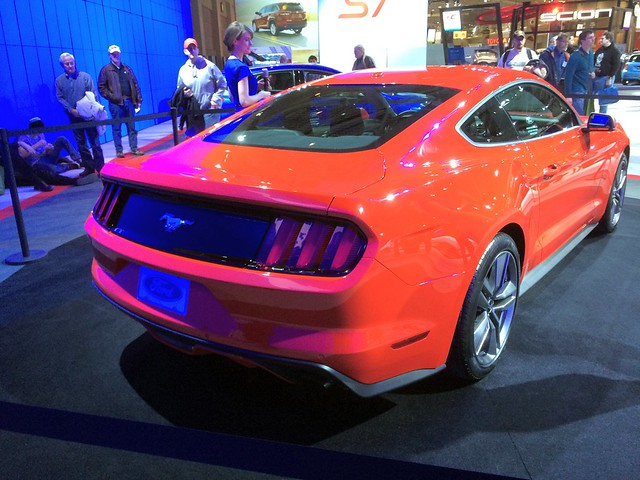 2015 Ford Mustang. Another locked car, one of the few you can’t actually get close enough to touch. The lovely booth professionals were touting the fact that it will (finally) not have a live rear-axle. Party like it’s 1984 Ford. Here’s another design that’s lost its way. (Full disclosure: GeorgeCo owns a bunch of Ford stock. When we say it’s awful, we really mean that it’s terrific and you should go out and buy one with all of the options as soon as it is available.) I’m not sure what Ford is using for inspiration. I fear it’s the Mach I Mustang. At least it is ugly coming and going. 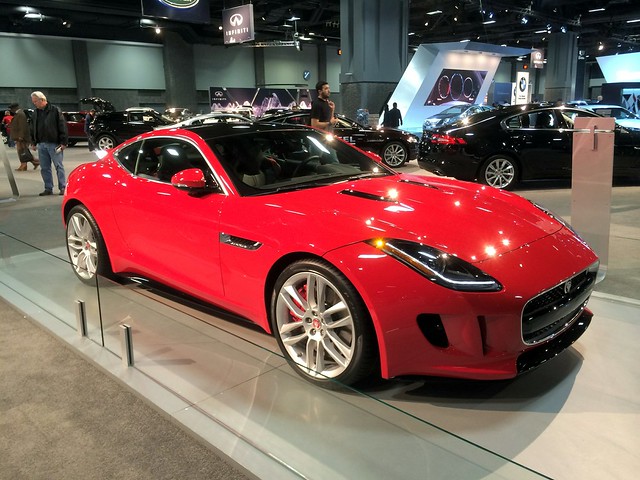 Jaguar F-Type. Jag had several F-Types there with and without tops. This is a sexy car even with a nose (like the MINI) dictated more by European pedestrian crumple-zone requirements than good design considerations. It’s best in the 3/4 rear view. 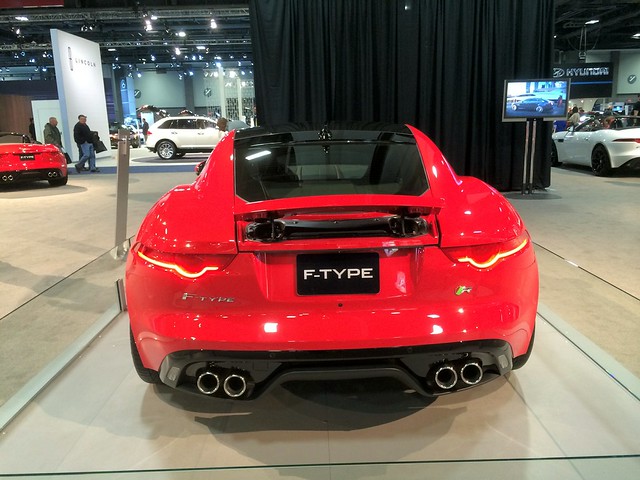 And unlike the over-designed M4 or Corvette rear-ends, the rear of the F-Type seems a bit unfinished. For the money though, put this car next to a Subaru BRZ and you would be hard-pressed to justify the extra $50K for the Jag. 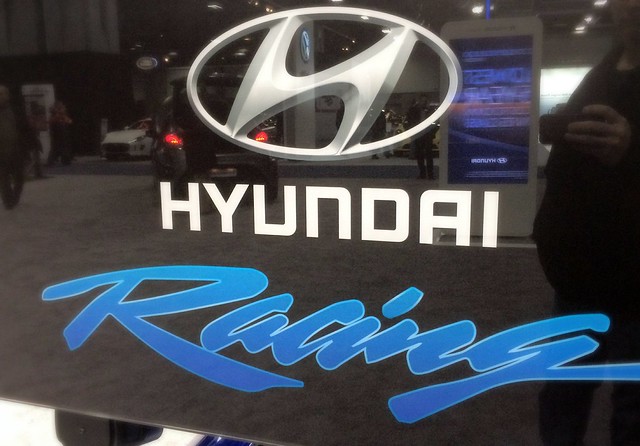 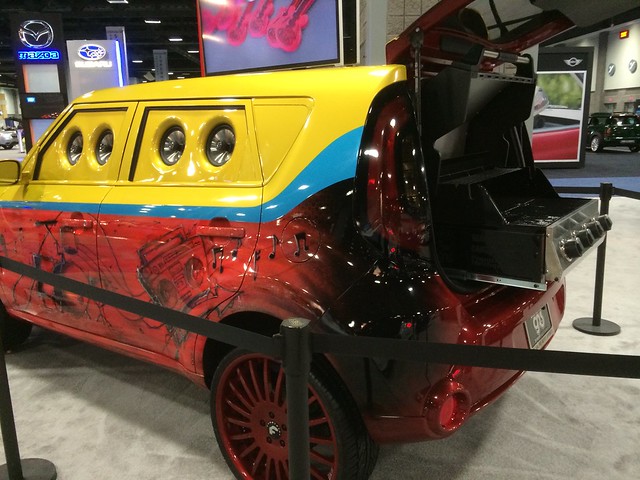 At least there was one interesting Korean car there. 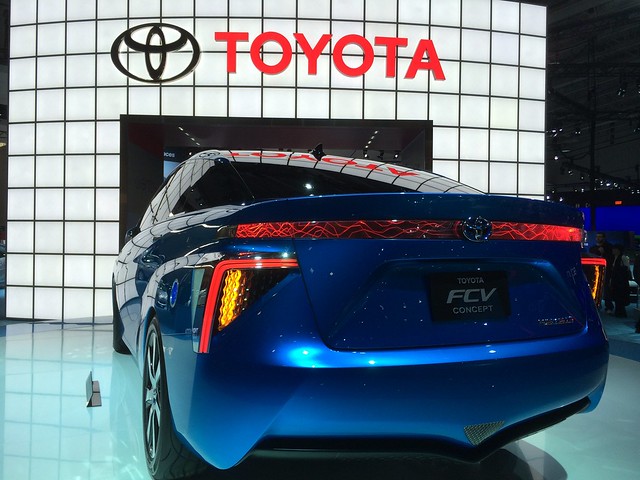 Toyota redefined fugly with Fuel Cell Concept vehicle, recycled from the 2013 Tokyo Motor Show. It was something you would expect from a first-year automotive design student, not the worlds-almost-largest automaker. But, then again, if you can’t design floormats what do you expect? 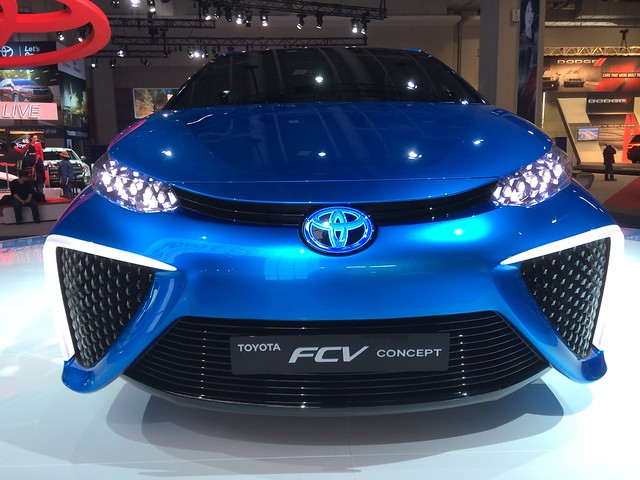 Where have I seen that face before? 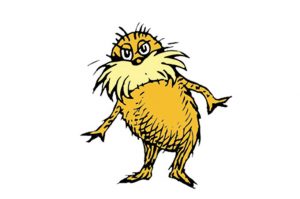 Click on over to Flickr to see the rest of the photos. As long as they keep having free admission for veterans and active military, GeorgeCo will continue to go. See you next January. 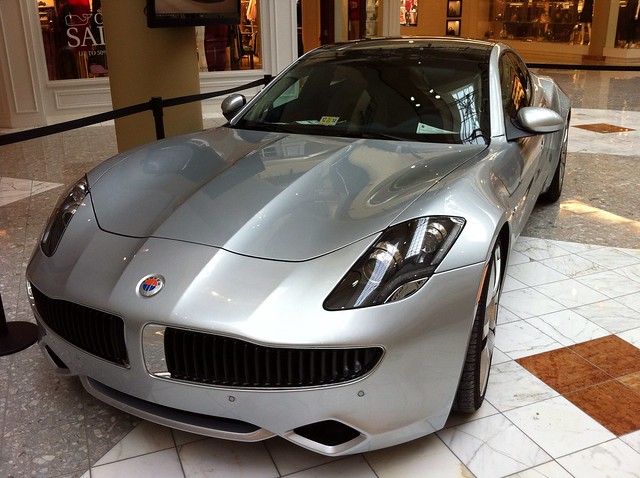 I stopped by Tysons Galleria for lunch expecting to see the usual Ferrari, Maserati, and Lambos on display (not your ordinary mall…) and much to my surprise they had a Fisker Karma there too. 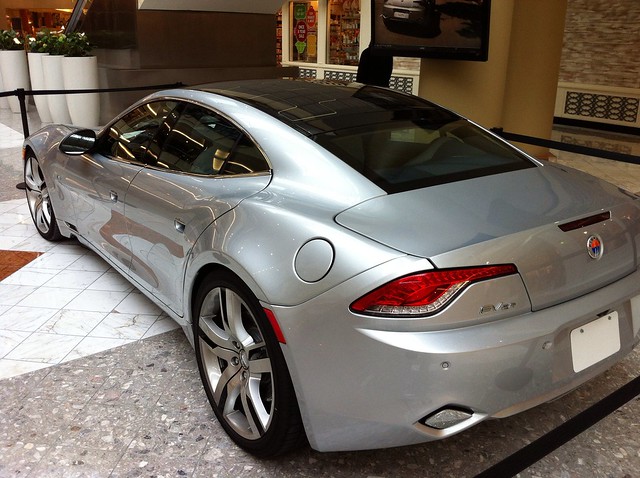 I’m not sure what to make of the design. It seems well built, even if the panel gaps are a bit large. I wasn’t expecting it to be this big. The proportions are just slightly wrong. I’m not sure if it’s because of the huge wheels or the fact that the wheels are pushed out to the ends of the body, but something isn’t right. It reminds me of a cross between a BMW Z4 (not a pretty parent) and a C6 Corvette. For $112K you can have a ‘lectric super-car with a 32 mile range too. I wonder if this is Colin Powell’s car…