GeorgeCo recently acquired a 2013 BMW X5 to use as a daily driver and tow vehicle. We’ve been spending the last couple of weeks fixing the little things that were wrong with it when we bought it. The previous owner — “Mr. Magoo” — had curbed all four wheels, one of which we decided to replace.  Thankfully a remanufactured X5 wheel will only set you back about $165 which is competitive with most refinishing services. 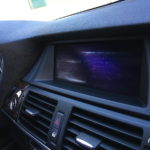 One thing we did notice, however, was that the no-glare coating on the video screen was badly scratched.  This is a common issue with used BMWs with the iDrive system. This coating isn’t very robust and vigorous cleaning/rubbing will start to scratch it off. It’s not something you notice until the sun shines directly on the screen, and then it’s just annoying. Thankfully, it’s a pretty easy fix that will only take about 30 minutes. 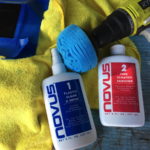 You’ll need a plastic pry tool, a crosshead screw driver, some painters tape, a Torx T-9 socket, and some plastic  polish.  We used The Novus Plastic Polish kit with a clean power-ball polisher we had from a headlight polishing kit, and an electric drill. You can also get a protective screen cover — just like your mobile phone.  More on that later. 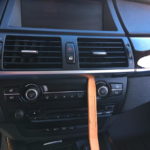 Using the plastic pry tool, carefully pry up on the vent panel below the video screen and pull the panel toward you to release.  You don’t need to disconnect the electrical connections, just carefully lay it back down against the console.

Remove the two screws holding the video frame to the dash.  Be careful not to drop the screws or you’ll spend the rest of your day fishing for them in the HVAC ducts. 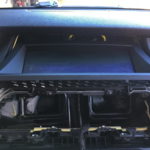 Pull the screen frame up and toward you.  Turn it over to access the cables on the back. 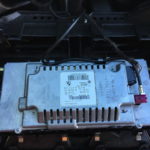 Note how the antenna wire runs across the top of the frame. Remove the antenna and electrical connection. 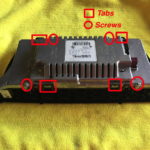 Set the screen face-down on a clean towel. Remove the four Torx screws and carefully remove the video screen from the trim panel by releasing the four tabs. Clean the trim panel while it is out, but be careful not to scratch the coating on the plastic. 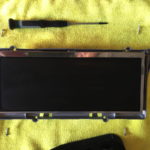 Turn the screen over and clean it with the cleaner in the polish kit. Examine for any scratches that go beyond the anti-glare coating. 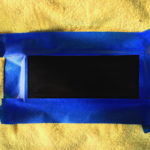 Tape around the edges to make clean-up easier.

Place on a towel and put a small amount of polish on the powerball. 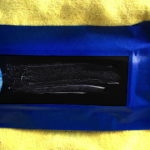 Spread the polish on the screen before spinning the ball, then slowly bring the powerball up to speed. Keep the ball moving without applying much pressure.  Just let the polish work. 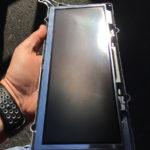 Clean the screen and examine.  Repeat polishing as necessary.  You may need to hand polish to get the corners. 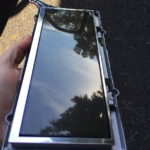 Once we were satisfied that the screen was polished, we tried applying a protective screen, but just like your mobile phone, even a couple of air-bubbles will spoil the look, so we decided to reinstall without it.

Installation is the reverse of removal.