If you’ve read any prior posts on this blog, you know I’m a huge fan of Dr. Colorchip. For small paint chips and scratches, the good doctor cannot be beat. But when the chips and scratches get bigger, the repair isn’t usually as simple. So I thought I’d try out some other products on the market to see if they work as advertised. Today I’m trying the ScratchWizard system.

First some background. I bought a 2013 BMW X5 in the fall of 2017. Although it came equipped with Park Distance Control sensors and cameras (back and side), the previous owner (aka Mr. Magoo) managed to scrape some paint off of all four corners. I bought a bumper repair kit from the ScratchWizard last November, and it took until May before the weather was nice enough for me to use it.

I followed the video instructions more or less, starting with two problem areas. First was this huge chip and scratch on the top edge of the bumper cover. 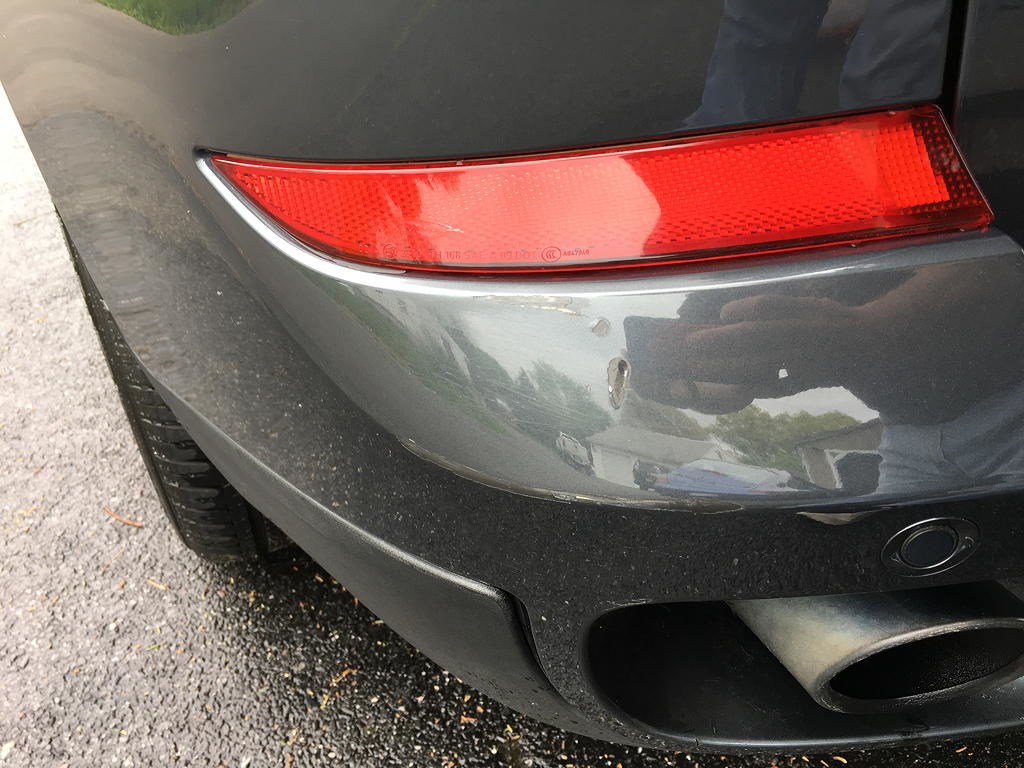 And secondly, a large scrape along the fold. One good thing about the color of this vehicle is that it hides scrapes really well, and I didn’t initially see this scrape until I started to work on the other one. 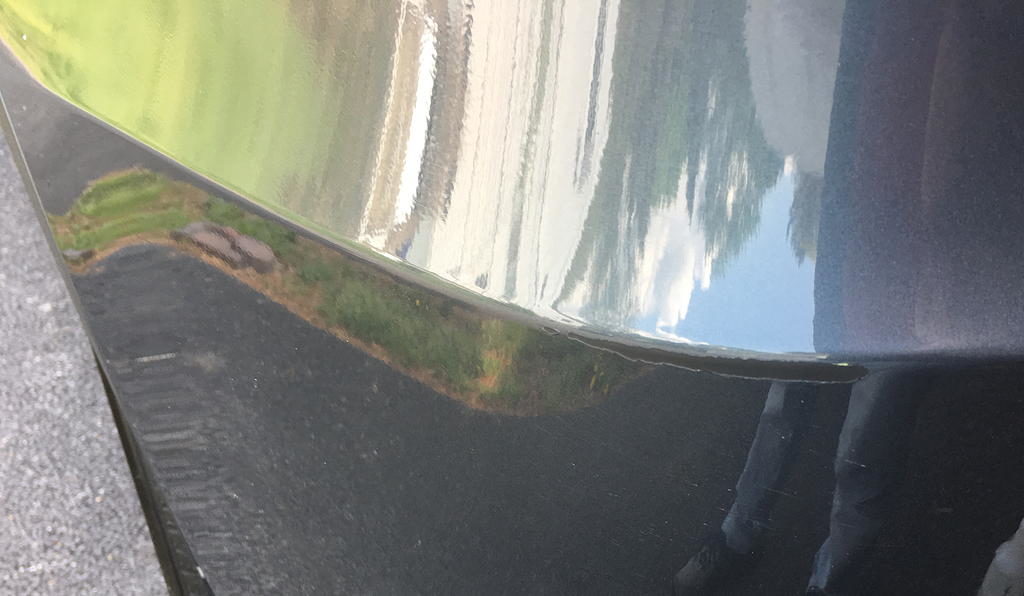 I didn’t want to use filler on plastic so I tried my best to repair the areas just by sanding before using the primer.  The key I’ve discovered is to go big. 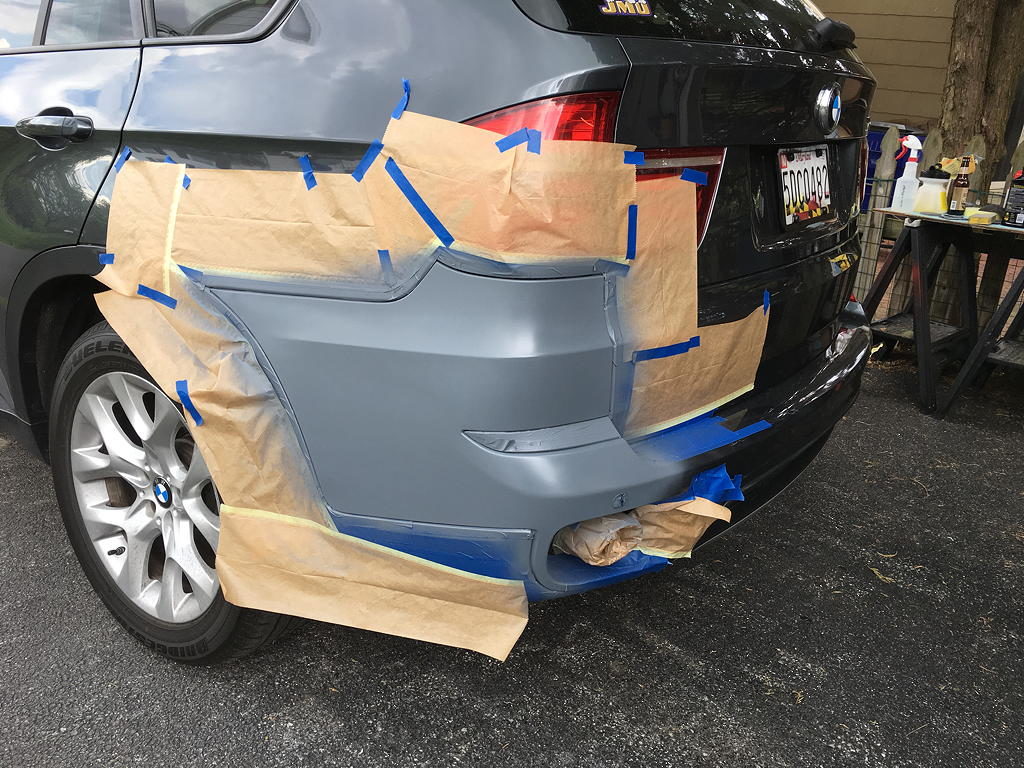 Take advantage of the natural panel seams and plan ahead where you want to blend  into the original paint.  If you mask off a small area, you’ll get hard lines and the repair will be more obvious. 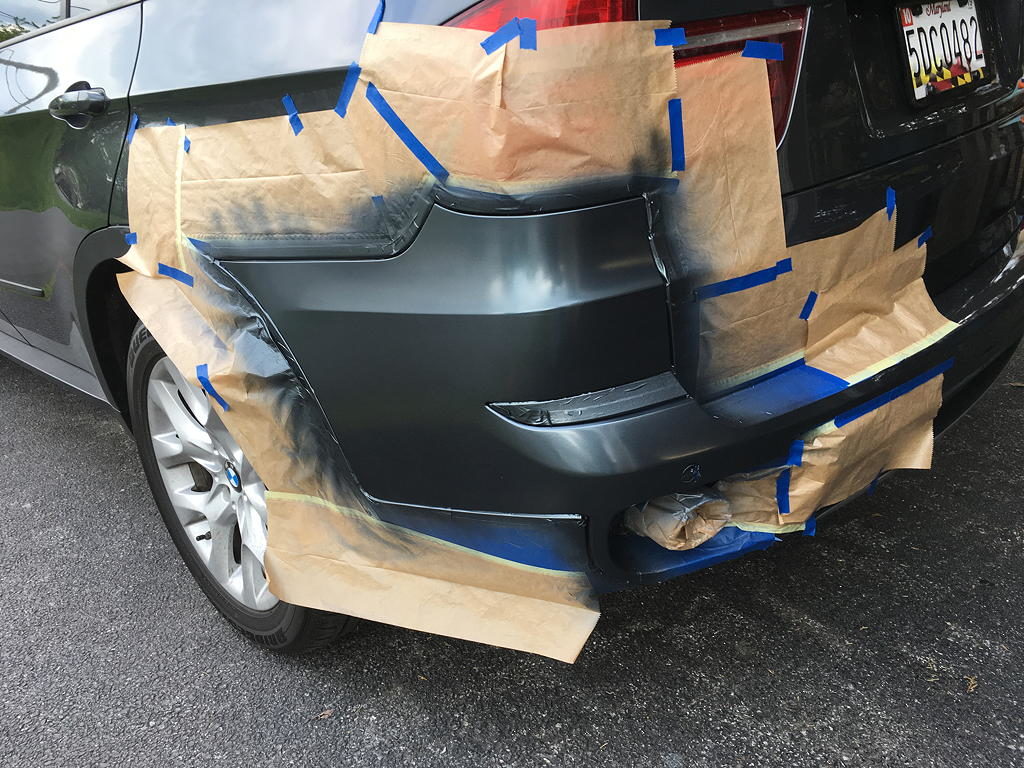 Follow the instructions allowing 10 minutes between coats, and 30 minutes between primer and color, as well as color and clear. Each step involves a light initial coat, followed by two medium-heavy coats.  You want good coverage, but you don’t want the paint to sag. Metallic paint is usually tough to match, but this came out pretty well. 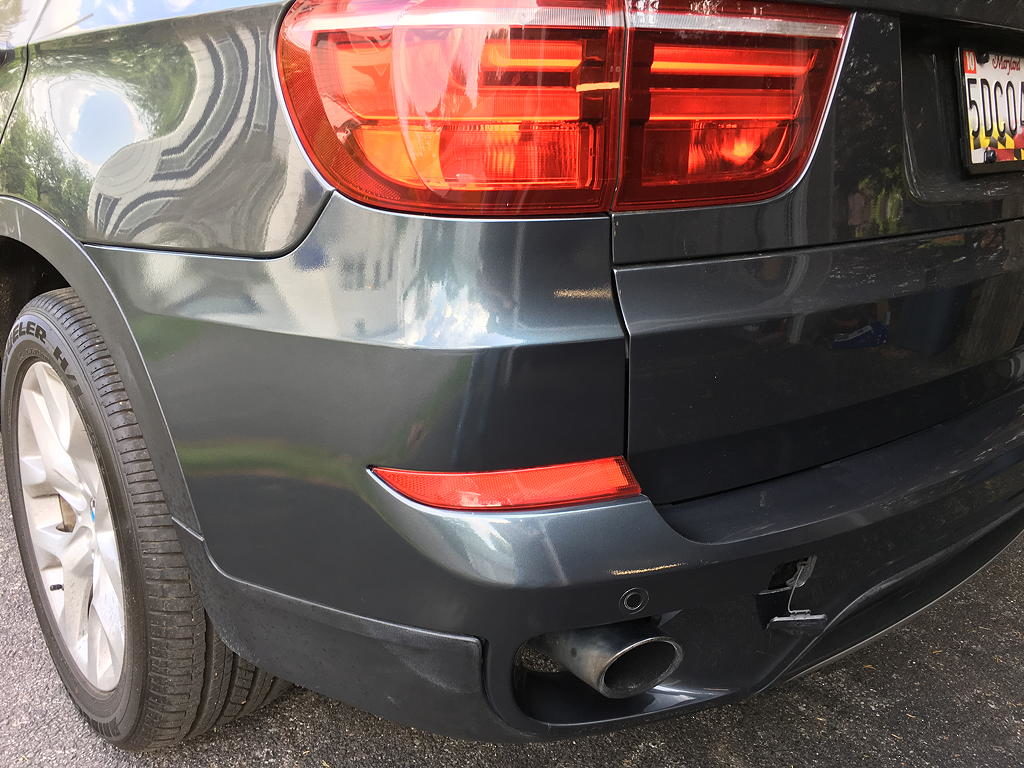 I’m really happy with the result.  Once the paint has hardened for another month, I’ll level the clearcoat with Meguiars 105. Result.

This is turning out to be a much colder winter in the Mid-Atlantic region than originally planned.  As a result, I’m falling behind in sorting the X5. This past weekend was the first since early November where I could get out and work on it.  The previous owner (Mr. Magoo) managed to scrape paint off of all four corners and dent the lower valance. It’s been too cold to try to repaint the big scrapes, but this past weekend I tackled some of the deeper scratches and the valance dent.

First off, it takes a certain talent to perfectly dent plastic without breaking it.  Because the PDC sensor is also damaged, perhaps Mr. Mr Magoo hit something larger, but this dent was about the size of a baseball. (It was actually much larger than it looks in the photo.) I wanted to see if I could get it out with just heat and some simple pry tools while I had the weather on my side. 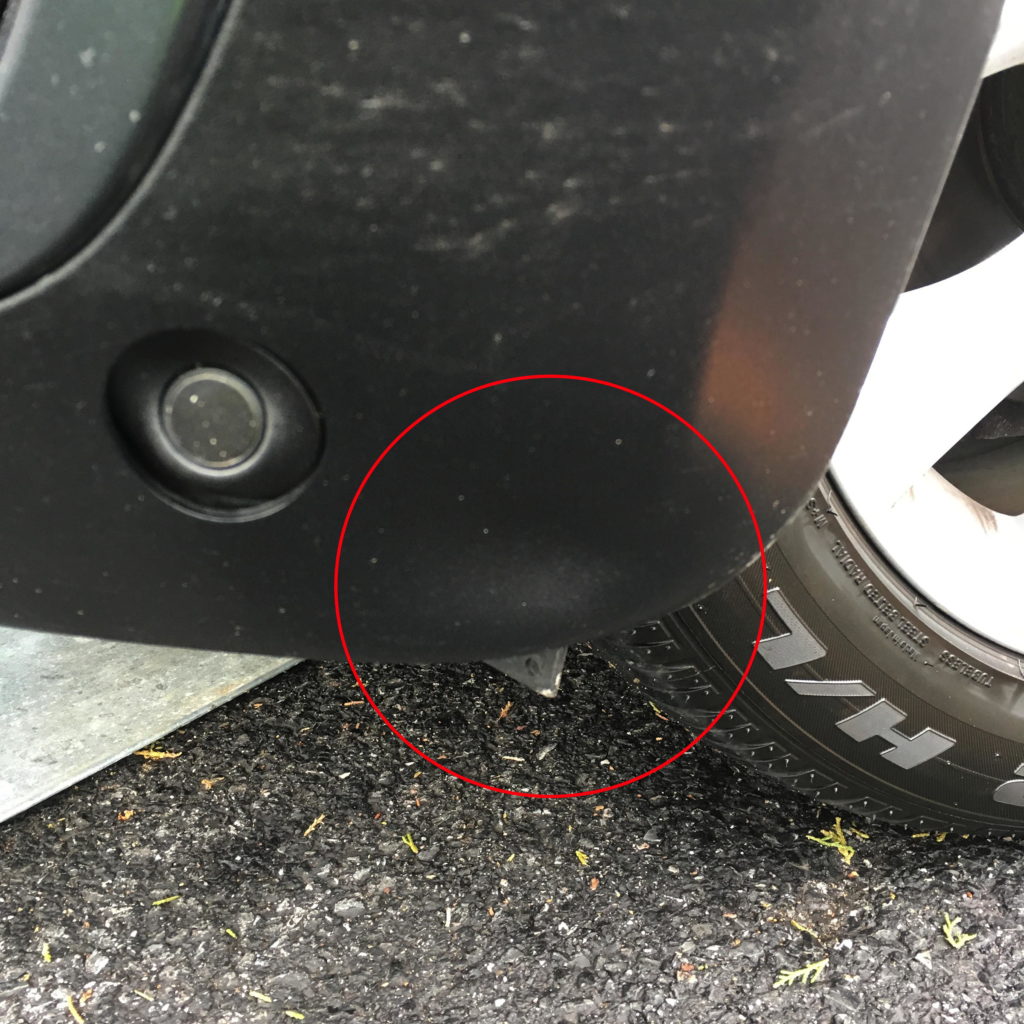 Once I gained access behind the dent, I slowly heated the plastic until it was warm to the touch.  Then using the flexible pry tool, I slowly pushed it back into shape from behind. It isn’t perfect, but it looks better than before. 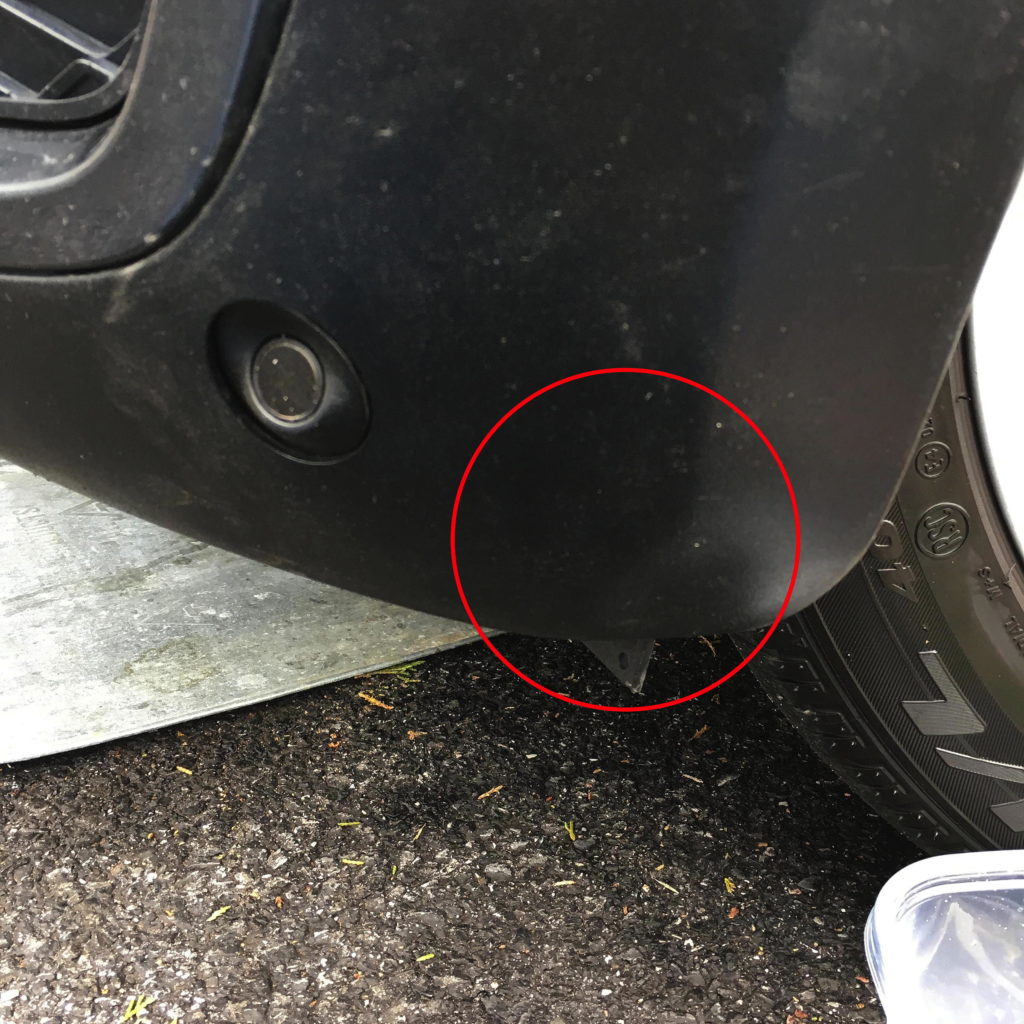 While waiting for the valance to cool down so I could put everything back together, I grabbed the random orbital polisher and a microfiber cutting pad.  The clear-coat on BMW bumpers is pretty robust, so I thought I’d see how well Maguiar’s M105 polishing compound levels the paint and helps to reduce the scratches. 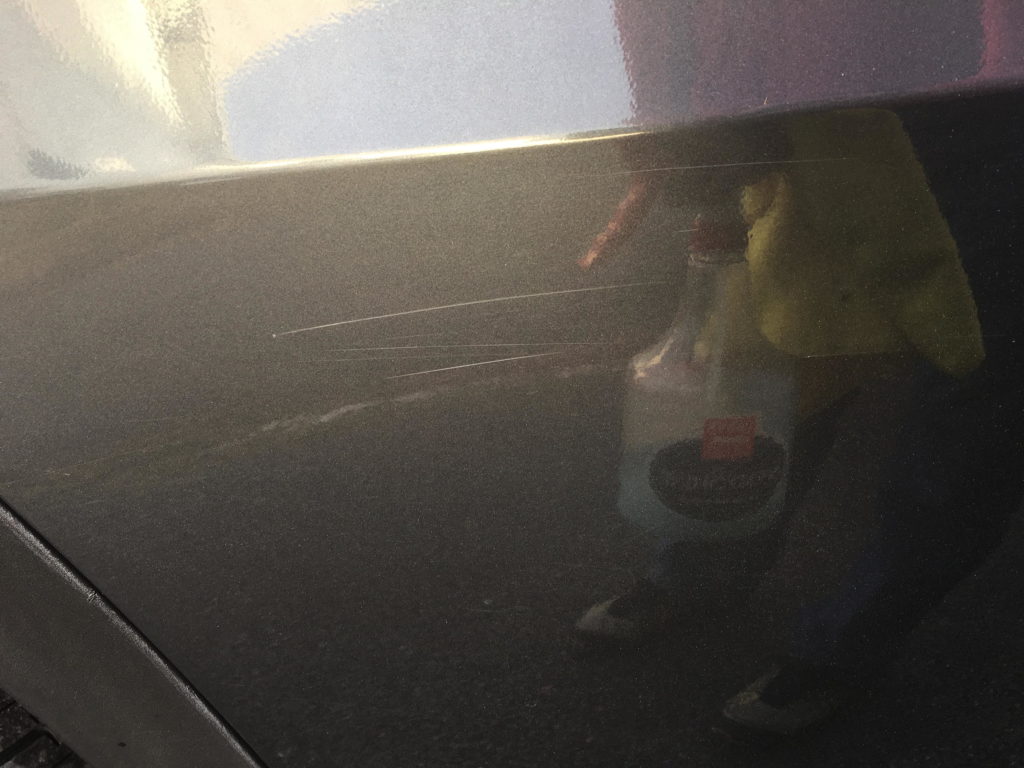 These scratches are pretty deep, but not down to the color coat. I took two passes with the M105 before switching to Griot’s Machine Polish #3, and sealed it with a layer of AmmoNYC Skin. The result being that the scratches are not really visible after you get about a foot away from the surface.  I probably could have gone a little further, but didn’t want to risk burning through the clear-coat. 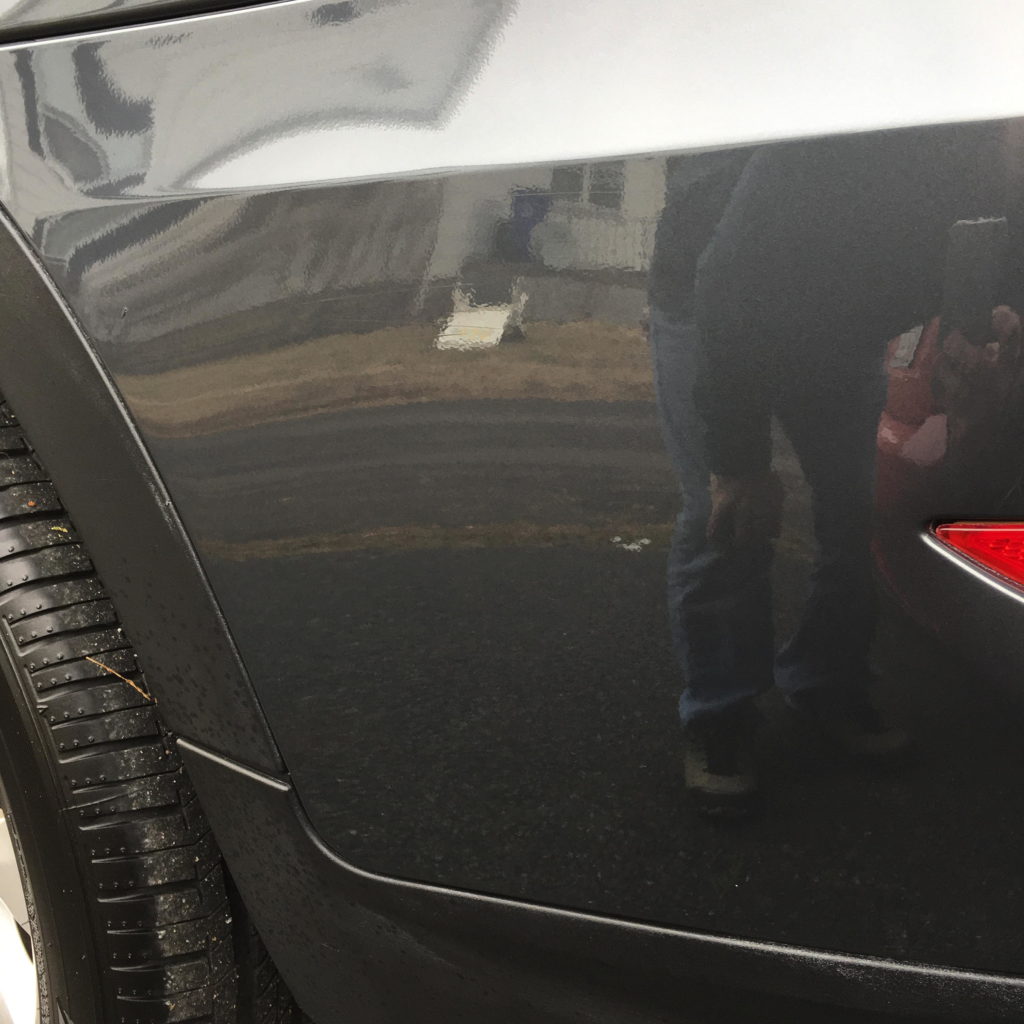