Getting the brake ducts right on the MINI is slowly becoming my white whale project (call me Ishmael). In Part Deux of this adventure, we found a good cooling solution using brackets from Chris Sneed,  but the location on the passenger side ducting was less than ideal.  First we got the hose caught in the crank pulley (which was fixed by use of a sleeve before any real damage was done), but most recently, the hose got pinched under suspension compression and the wire from the hose shredded the (brand new) CV boot forcing yet another axle repair and massive grease clean-up.

We got a Mishimoto reducer to fit the 3 inch brackets in the bumper and some aluminum tubing to form connectors and to protect the crank pulley.

The eventual solution turned out pretty well. Since the hose still matches the opening in the bumper there shouldn’t be any loss in cooling, and now with the reducer in place, it will be easier to remove the front bumper cover. There doesn’t appear to be any binding at steering lock. And when we jacked up the hub, there doesn’t appear to be any binding at full suspension compression either.  We’re running at Summit Point in a couple of weeks so we’ll know more after that event.

Leave a comment if you have a better way to route the hose on the passenger side. 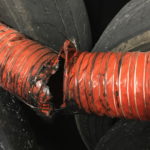 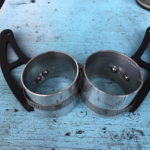 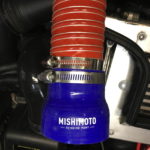 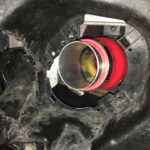 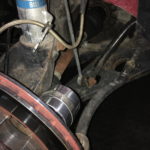 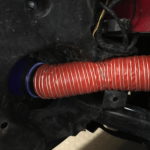 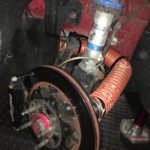 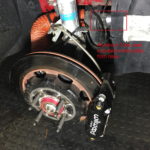 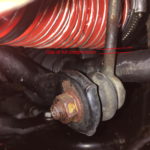 I finally got around to installing the brake ducts and hoses that I bought last summer. For the most part, the switch to Wilwood calipers and ducting into the wheel well solved my brake temperature problems during short track sessions of 25-30 minutes. But for longer sessions of 45-60 minutes or more, especially during hot, humid days, I was still having heat management issues. Oddly enough, not with the rotor or caliper, but with the ABS sensor in the carrier, which would turn off ABS mid-session.

The brackets I used came from Sneed’s Speed Shop and the hose is from Pegasus Racing. Chris Sneed makes a nice bracket that mounts behind the foglight opening of the R53 MINI, as well as a bracket that bolts into the dust shield mounts. The bracket to the bumper attaches via a couple of pop rivets. Aerodynamically, it’s not the ideal location, but the front of the MINI is fairly flat so I think it will work well enough. The highest pressure area is closer to the center of the bumper, but I didn’t feel like fabricating a bracket that worked around the radiator mount.  I’m also using a 3 inch silicon hose attached behind a 2.5 inch opening in the bumper. I’m sure that’s not ideal, but since the hose is ribbed, I figure what I loose in turbulence is made up for in volume. (Sounds plausible at least.)

Installation is fairly straight forward. You want the straightest possible routing for the hose that doesn’t pinch or rub against other moving bits (like the crank pulley, axle or serpentine belt.) You have to cut away a fairly substantial chunk of the front panel to create a path to run the hose behind the wheel well liner. (Try to save the tab to mount the liner.) Use Zip Ties to keep the hose tight against the frame rail. Be sure the hose is long enough for full travel of the steering.  Also be sure to leave enough hose to facilitate mounting of the bumper cover.

You do have to remove the brake caliper and the rotor to mount the bracket to the carrier. Sneed’s brackets are designed for stock rotors (stock Cooper S or JCW). If you are using an aftermarket caliper and rotor like the Wilwood’s I used, you may have to make some adjustments to get the to fit without binding. In my case, it just took a little persuasion (with a hammer) to get the brackets clear of the rotors.

Update #1: When I pulled the liner to check the brake hose after a couple of months, I found out it was getting pinched between the liner and the crank pulley, so I wrapped it in an aluminum sleeve.

Update #2:  After a weekend of hard driving on the track with PCA Potomac at Summit Point, I found that I crushed the duct between the axle and subframe. The exposed wire shredded the CV boot.  Trying another sleeve, but may have to go to smaller diameter hose.  Will see how this holds up at the Shenandoah Circuit in a couple of weeks. 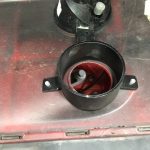 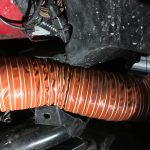 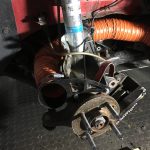 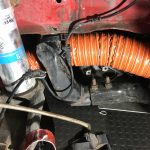 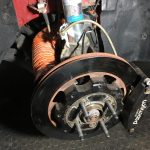 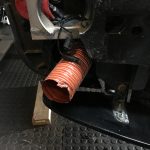 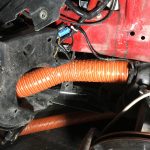 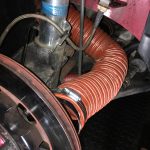 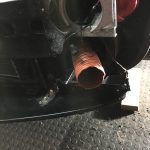 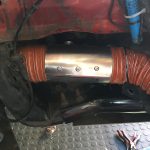