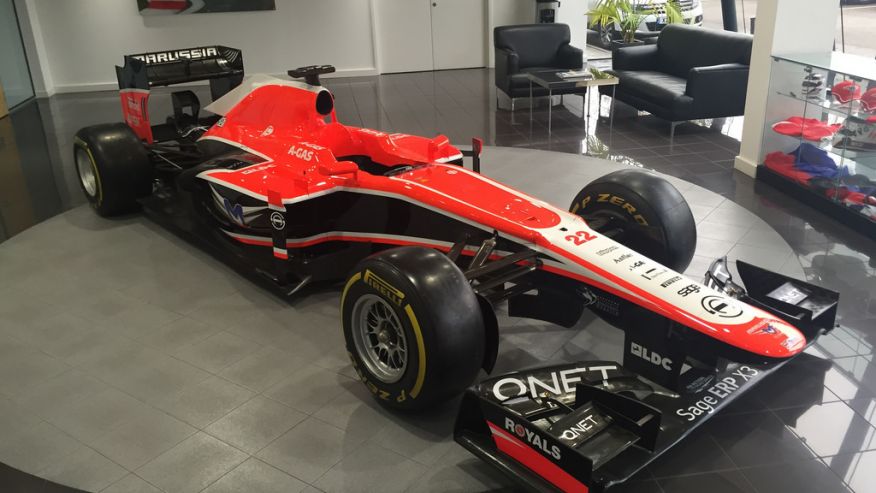 Splitters? Tea-trays? Wings? Everything goes! We must be C-R-A-Z-Y, come on down. Anybody want to launch a Kickstarter campaign to buy Marussia F1’s assets? Anyone?…. Sale includes:
Marussia Formula 1 Race Cars (No Engines), Complete Test Lab, Race Day Trailer Fleet, Complete Machine Shop, Corporate Offices, Large Quantity of Spare Parts, Including Race Day Replacement Parts & Tools, High Tech Server Equipment. If you’re in Oxfordshire, be sure to drop by and check out the auction.

The Total Company had a Renault F1 car at their booth during the SEMA show in Las Vegas. There wasn’t even a plaque saying what it was. I guess since SEMA isn’t really about F1 they figured nobody really cared. After all, you’d be hard pressed to find double-dubs that would fit.

As best I can tell by searching the Google, this is the R31 from the 2011 season. It isn’t the most recent car, but it was completely unguarded so I took the opportunity to get some detailed photos. Though the names on the car are of the current drivers, this was the car driven by Nick Heidfeld and Vitaly Petrov to two surprising 3rd place finishes at the beginning of the 2011 season. The car went on to place Lotus Renault 5th in the constructor’s championship, which given the size of their budget that year, was a good accomplishment. 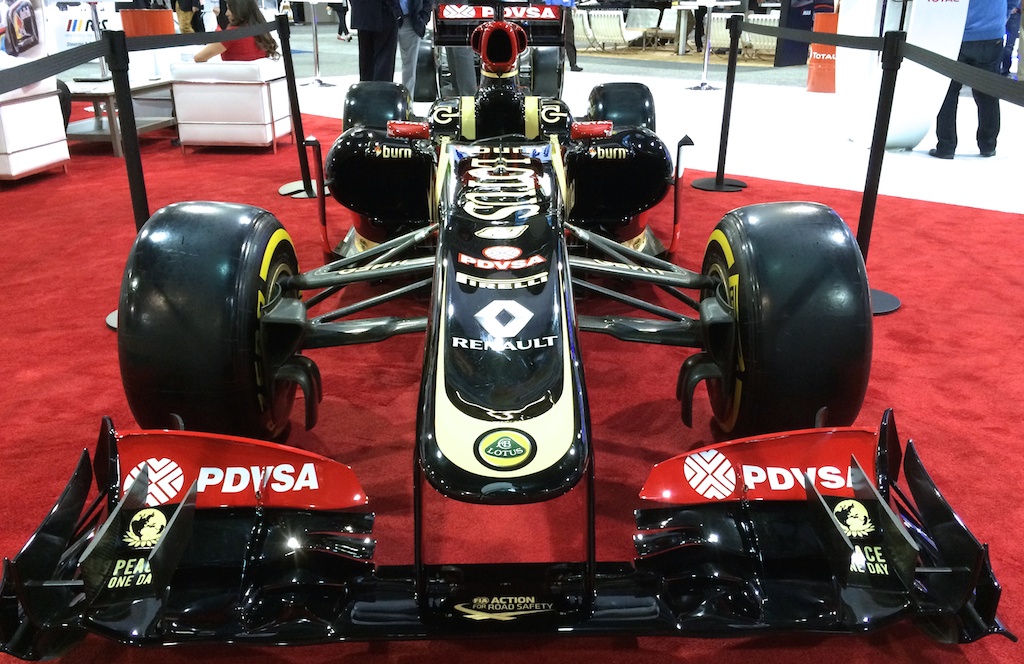 Mostly I was interested in the complex aero-bits that you really can’t see on television. I always marvel at the intricacy of design of the various trim tabs and wings that define the current state of the art. I think about the engineers who spend hours in the wind-tunnel and CAD systems designing these wings, only to have the driver’s knock them off with no apparent effect on performance. 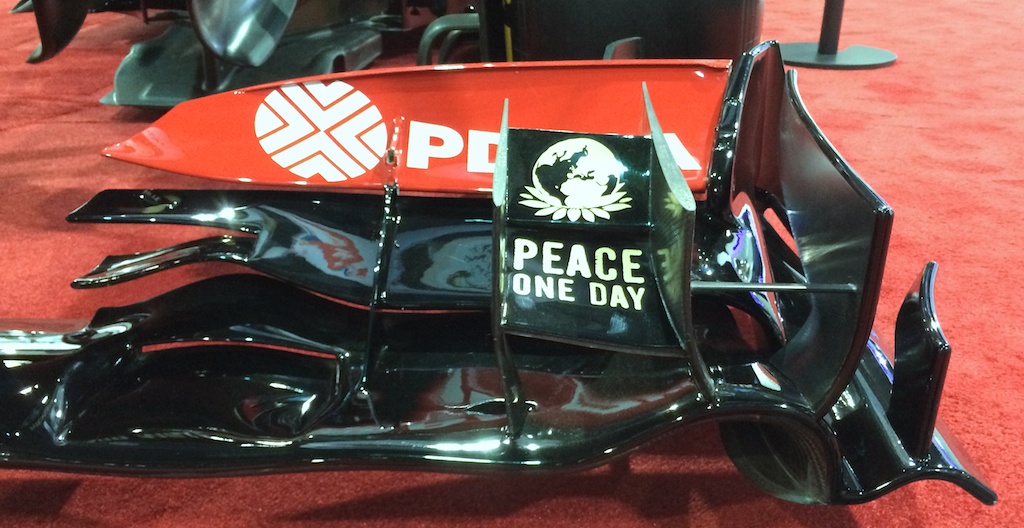 The degree to which they are trying to bend the air around the disturbance of the front tires and place it better for use further on in the chassis is amazing. I was especially interested in the details of the so-called “Tea Tray,” seen here below the suspension pick-up points on the body. 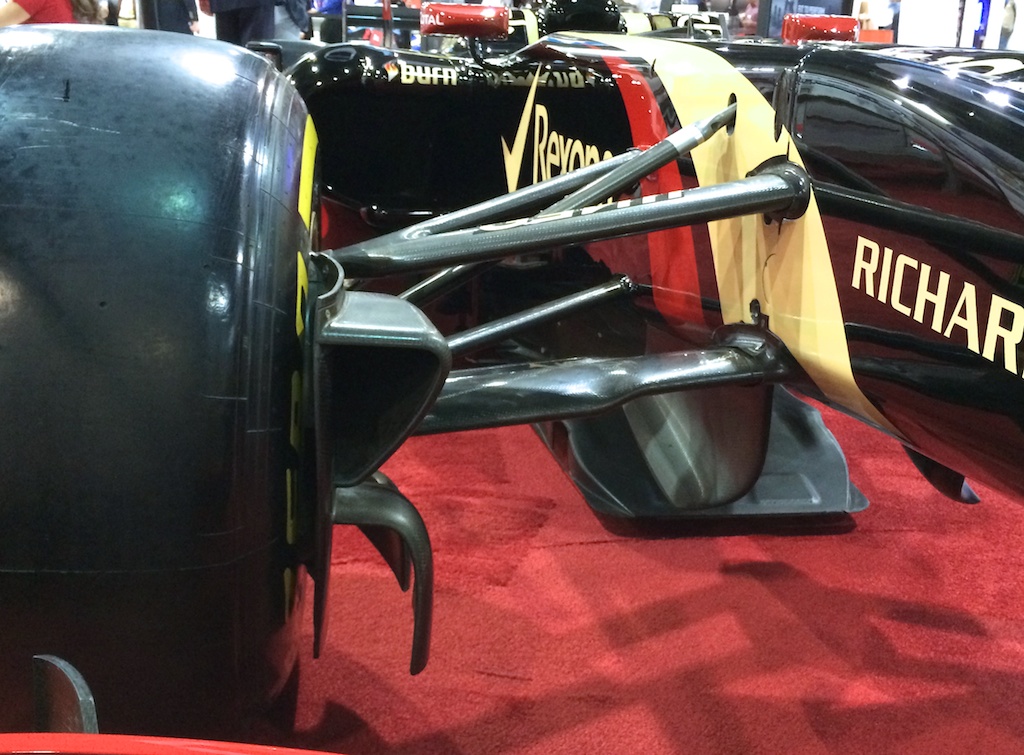 I always though the Tea Tray was flat, but the sides are sculpted and shaped to move the air along the edges at different speeds than underneath. Something you can see in detail on the side of the Tea Tray.

The openings in the side pods are quite small compared to previous years and the aero sculpting continues to feed air from the front of the car to the rear floor. 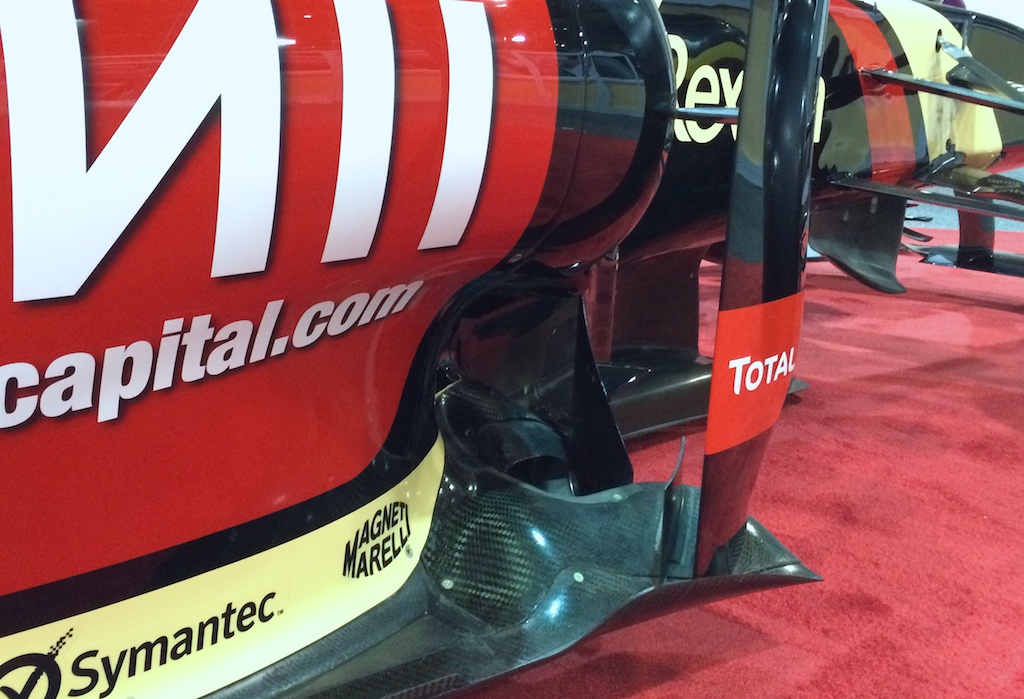 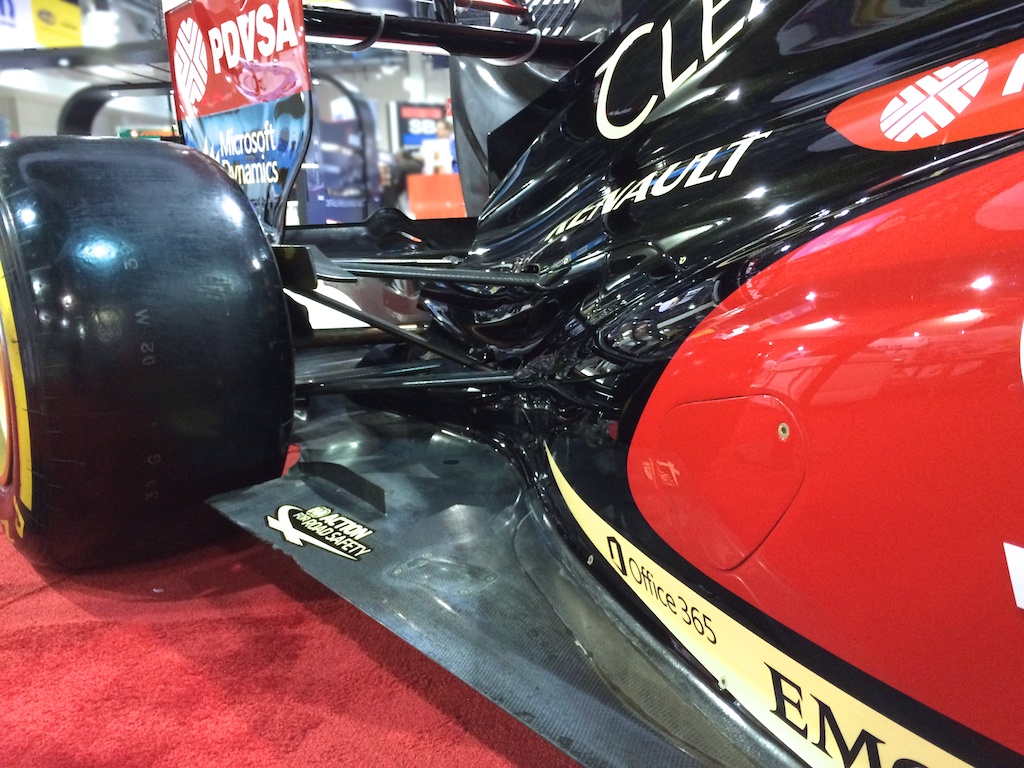 This was the year before the blown rear diffuser, even still, the shape of the diffuser is very complex and fragile-looking. 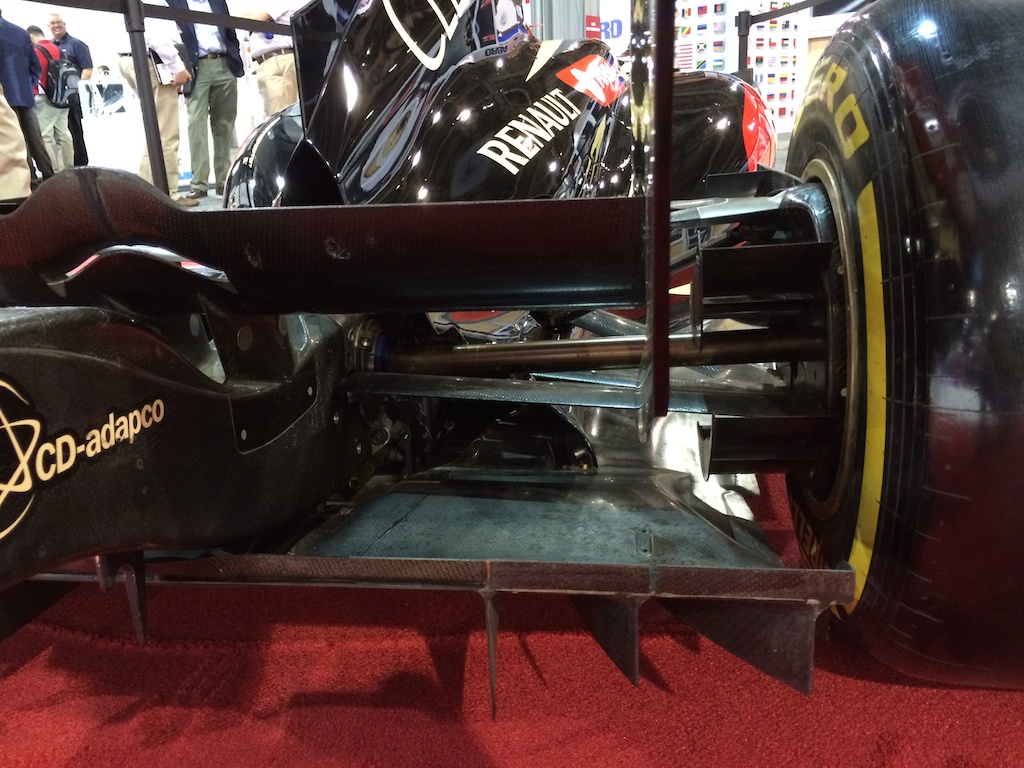 It’s interesting to compare the rear of this car to the DW12 Indycar — a contemporary design — in this case, the number 3 Indycar of Helio Castroneves. 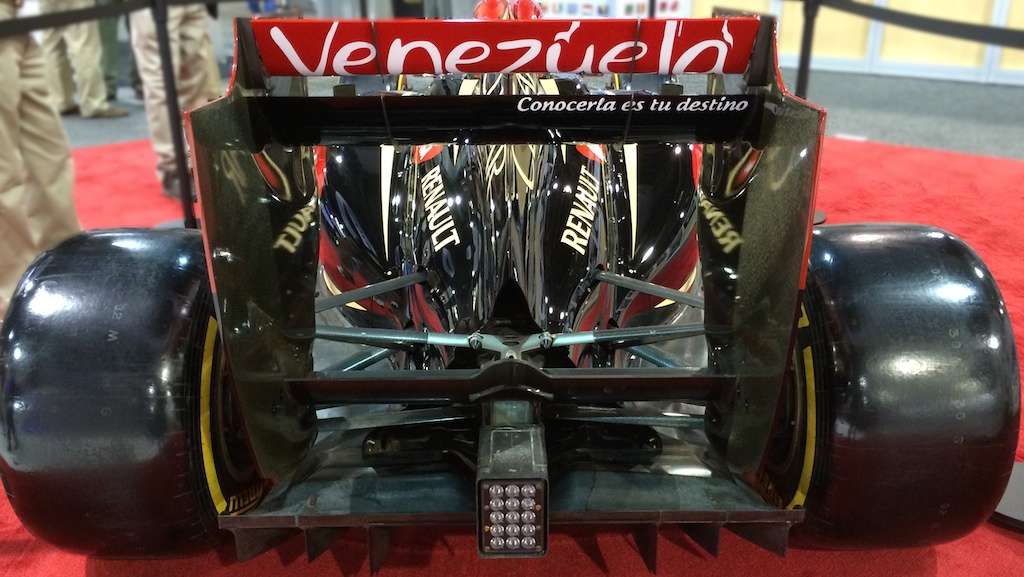 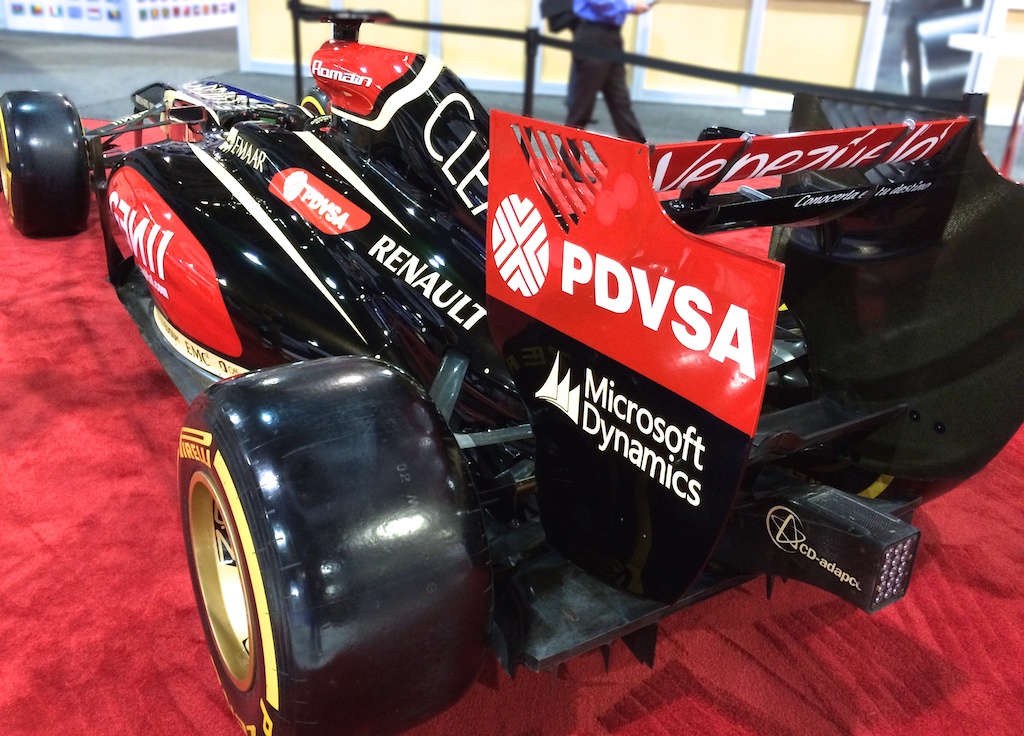 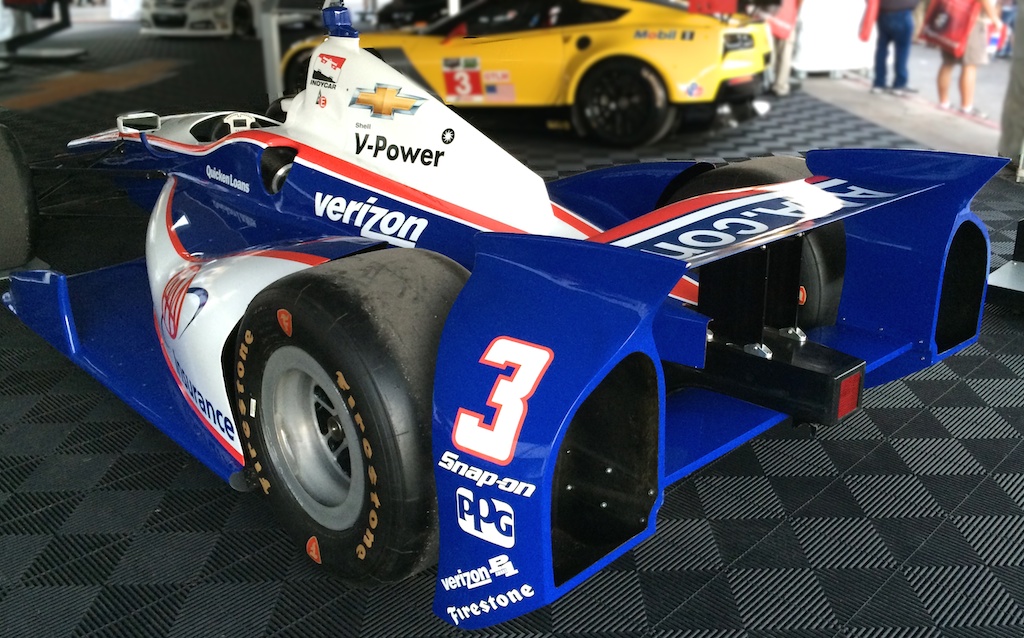 The Indycar seems positively old-school, especially in the low down-force configuration seen here. The funny thing about this display is that just across the floor from it was a contemporary Cup-car. Talk about old-school: the best in 1950’s technology, only now with fuel injection I suppose…. 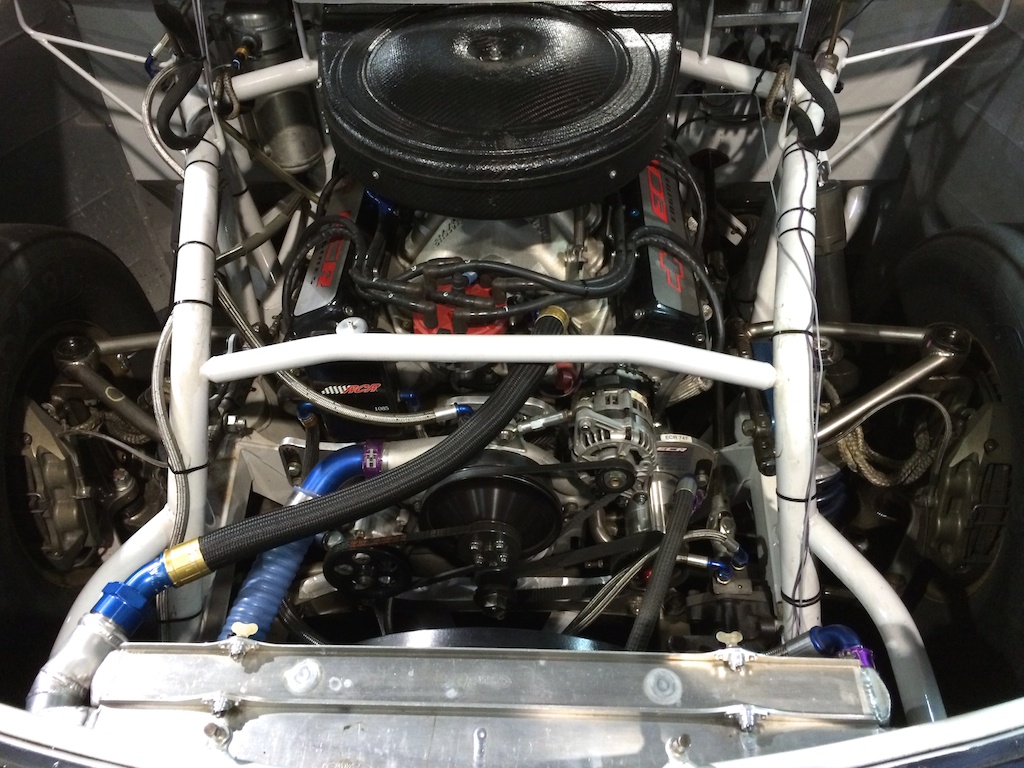