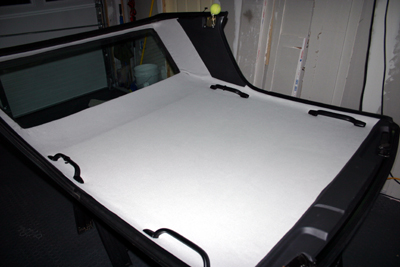 It has been a while since I’ve posted about progress being made to the BMW. I finally managed to repaint the right rear bumper cover that I repaired some weeks ago. (I still think the guy who did my MD state inspection scraped the right side of the car against a wall…) I managed to repair the broken plastic, smooth out the damage, prime, repaint and clearcoat. Now it’s probably the best painted piece of the car. I’ll try to get a photo of it soon.

In the process of making the repairs, I discovered two great products. The first is a special type of paint for chip repairs called Dr. Color Chip. It really works as advertised at repairing paint chips without blobs unlike most touch-up kits. It also works over large areas to restore some shine to tired and abused painted surfaces like the leading edge of your hood. The other product is the touch-up kit from Paintworld. I ordered the kit to repaint the bumper cover. I was able to apply two coats of primer, two coats of paint, and three coats of clearcoat in the span of a single afternoon. I’m almost tempted to repaint the hood with this stuff. Almost.

Today I put a new headliner (with some skillful sewing help from my lovely wife) in the hardop. It’s getting cold enough around here to want to switch to the hardtop, and I though it would be nice to not have bare fiberglass over our heads. The hardtop was a freebie that was thrown in with the purchase of the car, mostly because the guy who sold the car couldn’t think of how to get rid of it. It was covered in mildew and had a nasty smell. I ripped out the old headliner (what was left of it) and bleached out the mildew.

I found a website called Stockinteriors selling headliner material and decided to give it a try. Normally, modern headliners fit over some sort of board that then attaches to the car. This one would have to be applied directly to the roof so there wasn’t much room for error. We made a paper pattern, then a cloth mock-up and finally the real thing. It took some adjustment to fit, but it looks pretty good. I also bought some new carpet from Stockinteriors and will try to fit it in the coming days.