I decided to take the MINI to work this morning to see if everything was back in order after recently replacing the motor mount. The engine seemed to be running a little rough, but I just figured the new motor mount was a little more firm than the old one. I got off the highway after one exit due to traffic and I got the dreaded CEL (Check Engine Light.) I hate that light. It might as well say, “Yo. Something’s wrong. I know what it is, but I’m not going to tell you. Here’s a hint: It’s under the hood….” And the car went into limp mode. Fortunately I still had my code scanner which told me it was code P1688. That’s handy. What does that mean? Ugh. I just turned around and headed home. I’d have to reset the ECU every 5 minutes, but it is a pretty hilly route so I could do lots of coasting. So what is P1688 you ask? Not what it seems.

P1688 is the code for “Electronic Throttle Control Monitor Level 2/3 Mass Air Flow Calculation”. Which would indicate a problem with the throttle body, but I also had code P0107 last week at the track which is “Manifold Absolute Pressure/Barometric Pressure Circuit Low Input”. With those two together, the car is saying that for a given amount of throttle, there just doesn’t seem to be enough boost going on. And on the R53 MINIs that usually means the crank pulley (or more accurately, harmonic balancer) is shot.

The stock part is about $200, but since this car gets lots of track time, better to upgrade to a more robust model. ATI Performance makes a Super Damper for about $350, which we also sell in the store. As the old damper started to disintegrate, it took a good amount of the old belt with it. The old belt has had one rib sliced off. These two belts should be the same width. 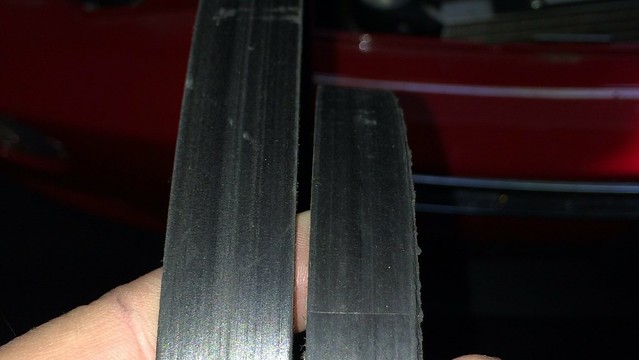 Once you get the right front up on a jack-stand, remove the wheel and fender liner, and use a belt tensioner tool to remove the belt. 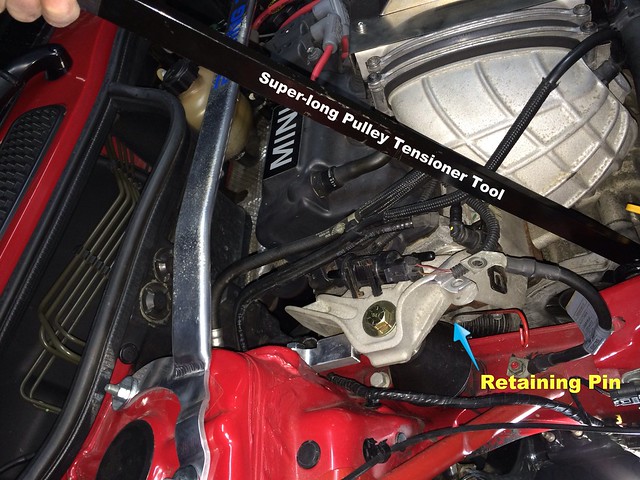 You can’t tell if the damper has gone bad by viewing it from the front, but when you look at it from the side, you’ll see a gap developing as the belt pulley separates from the damper. 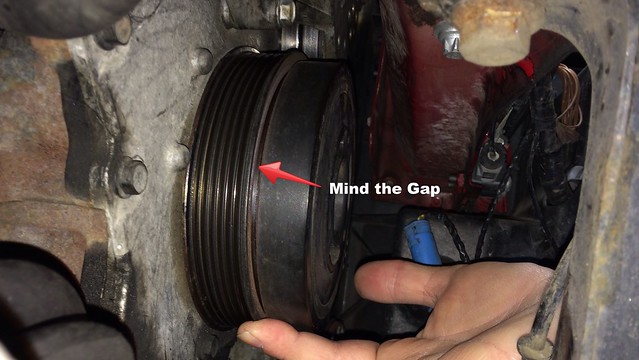 ATI includes basic instructions with the new super damper. Here are some tips to make it easier on you. (Use at your own risk.)

You can use a universal pulley removal tool if you’re careful. You will need to buy 3 M6 bolts that are long enough to work with your tool. Be sure to get the hardest bolts you can (10.9). First step is to remove the center bolt. Use some penetrating oil before you start. You may get lucky and be able to remove it just by putting the car in 6th gear and having someone stomp on the brakes. But for me, the crank still turned. I ended up using a brace to stop the crank from rotating. In this case, it’s a tool for removing a fan from an E30. Go figure. 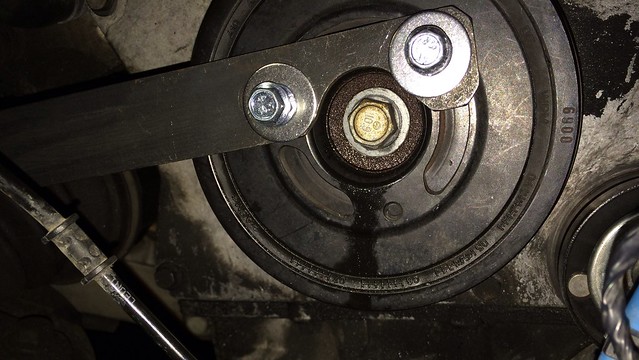 Now the real fun begins. If your tool did not include an appropriately sized center pin, then put the bolt back in and tighten, leaving about a half inch of threads showing. Attach your pulley removal tool. Have a helper hold the bolt with a wrench as the pulley tool will be pushing against the bolt and it will try to screw back in. When the bolt makes contact with the damper, you have to back it out some more and adjust everything and go again. Make sure the M6 bolts are not twisting. You should be able to compare the location of the damper to the other pulleys on the front of the engine to judge if you’re making progress. I ended up having to replace the bolt with a longer one to get the last quarter of inch of travel needed to remove the damper. 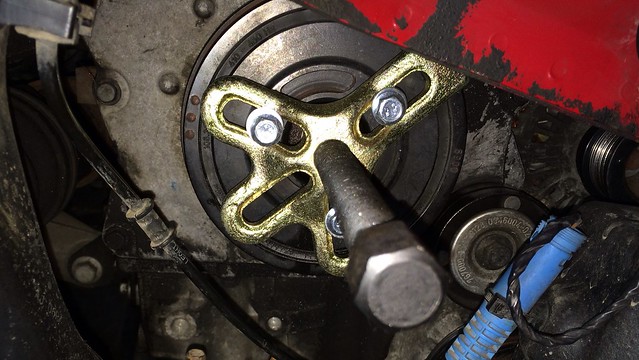 Once it came off, you can see how badly damaged it really was. (Hint: this is supposed to be one piece, not two.) 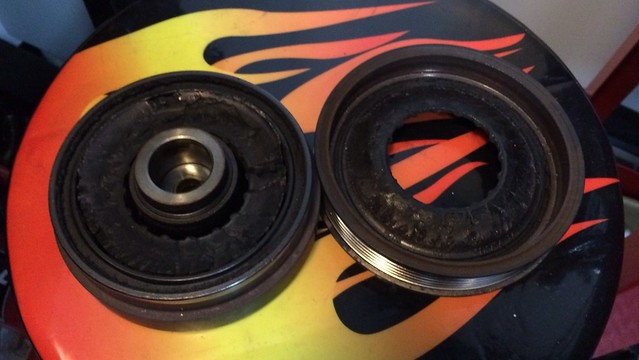 With the damper removed, you can see where it scored the engine as it oscillated. I’m surprised that didn’t make more noise…. 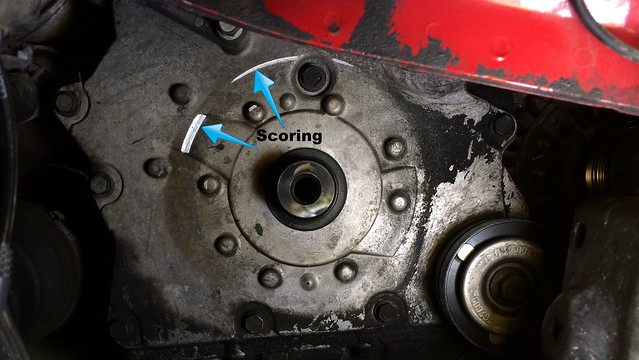 Installation is the revers of removal. No, not really. From the ATI instructions: Inspect the crank for any burrs or nicks. Blow out the threaded hole to free it of debris (and clean the engine before you start since you can’t really get to it once installed.) 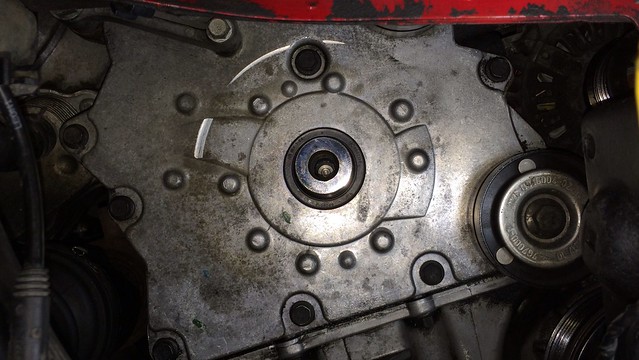 Start the new super damper by hand. Heat it with a heat gun or hair dryer if it doesn’t start easily. Use the supplied long bolt and washer to grab enough threads to pull it on most of the way. Continue until it bottoms out, then remove the bolt. 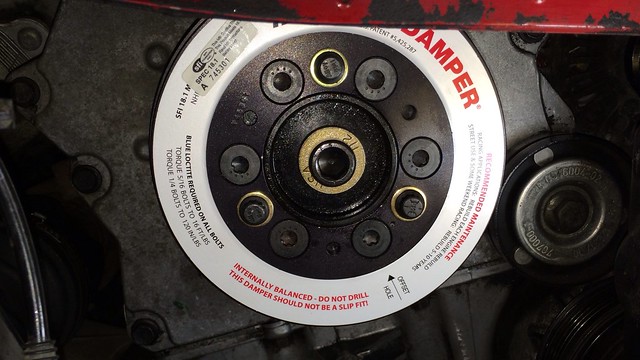 Use a new OEM bolt to finish installation. Apply blue loctite and torque to 85 lbs. Reinstall the belt, taking care to route it correctly. 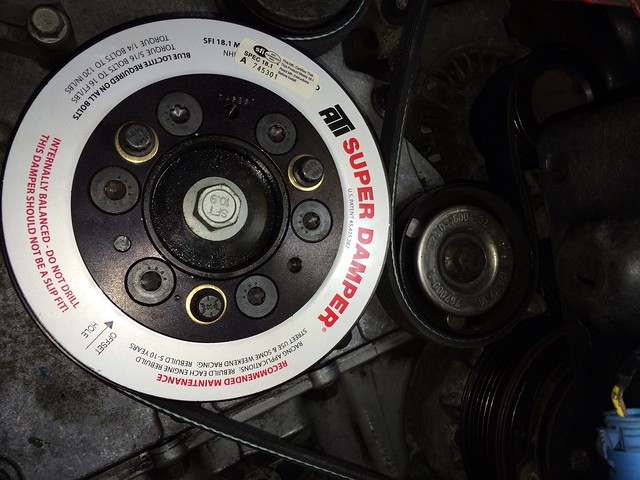 Carefully release the belt tension using tensioner tool. Start the engine to check if everything is OK and the belt alignment is straight. Then reinstall the fender liner and wheel. Torque wheel to 87 ft lbs.

So which crank pulley do you recommend? Like so many things in live, that depends on your application. If you’re happy with stock performance, and you think you’ll be selling your car soon, go with the factory damper.  MINI redesigned them in 2005 so they’re a bit lighter and a bit more robust. Just keep in mind they’re good for only 75-80K miles. If you have a modified engine AND you want to raise the Rev limit, then get the ATI super damper. If you are building a race motor and want to rev up to 8K, then this is the one you want. If you’re looking for performance on a budget, then get a light-weight crank pulley. We sell both the Alta and the Cravenspeed crank pulleys. We like the solid design of the Cravenspeed but ran the Alta one successfully for 10 years on our old car.

Stock or 2% overdrive? We always recommend stock sized crank pulleys. Better to get power gains by under driving the supercharger pulley (spins faster) than over driving the crank pulley which spins both the supercharger, AC and the alternator faster. Recall that the water pump sits on the back of the supercharger. If you put a 2% OD crank pulley on a car with a 17% SC pulley, you’re effectively using a 19% SC pulley. At that speed, the water pump is likely to cavitate resulting in a decrease in cooling efficiency. Any gain in boost is lost to an increase in temperature.