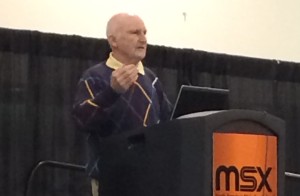 Elliott Forbes Robinson gave an interesting keynote at the SCCA Motorsport Expo last Saturday talking about what he’s learned during his 37 year career in racing. Following along with Randy Pobst’s theme of fear, he noted that if you’re feeling the adrenaline rush while driving, then you’re probably doing it wrong. It should feel awesome, yes; but not exciting. Exciting is often bad and can lead to surprises. And surprises are often bad as well: wheels falling off, fluid on the apex, no brakes, throttle stuck. It’s not that good driver’s don’t make mistakes, it’s more about how they recover. Like good actors who miss a line in a play, the observer may not notice. For a good driver that mistake could be too fast corner entry, or going off course — just without drama. But it is more a matter of style. He always tries to turn in early (something I hear attributed to Mike Skeen once too.) By turning in early, he’s able to make constant adjustments, but more importantly, he can get on the throttle at the right place, every time. He hardly ever trail-brakes and thinks of braking as the least important aspect of the corner. He tries to get all of his braking done in a straight line. As a result he consistently gets better gas mileage while maintaining competitive lap times.